A lake bound journey of liberation 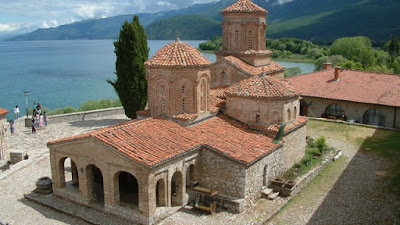 On a visit to the monastery of St Naum, on the shores of Lake Ohrid, I remember standing alone in the small side chapel that houses his tomb. I was looking at one of the frescoed images of his life and meditating. Suddenly, an adjustment was made to the pattern of my breathing, and its association with the mantra, as if an instruction had been given from without, though silently. It was a micro-adjustment, so gentle and subtle, but one that gave me then, continuing now, a renewing focus. I only have to stand there in my imagination again to receive the helpful 'nudge' once more, to go more deeply into the breath of things.

It is that kind of place for those who recognize or are recognized by it, as Kassabova does, is.

It is at St Naum that Kapka Kassabova finishes her journey in her remarkable book: 'To the Lake: A Balkan Journey of War and Peace.' It continues and extends her reflection on borders of her previous book: 'Border: A Journey on the Edge of Europe'. https://ncolloff.blogspot.com/2018/02/borders-what-are-they-good-for.html. Here, we have moved further west to the Lakes Ohrid and Prespa and to yet another place constrained by its boundaries.

Ohrid is the birthplace of her grandmother but she was destined to grow up in Bulgaria, the fourth generation of her family to find themselves emigrating, shifted by complex patterns of history and of personal desire, both of which she compellingly, often hauntingly, explores.

One strand of the book's weaving fabric is how an underlying cosmopolitanism of diverse people, rubbing along, in the human patterns of joy and sorrow, the famous 'Macedonian salad', has been consistently and painfully disrupted by the ideologies of national identity and political competition. Ohrid itself, in the twentieth century, has been Ottoman, Bulgarian, Serbian, Bulgarian, Yugoslavian, Bulgarian, Yugoslavian, 'FYROM or the Republic of Macedonia' (according to preference); and, now in the twenty-first, most recently, the Republic of North Macedonia. The lakes are divided: Ohrid between Macedonia and Albania and Prespa between these two and Greece.

The brilliance of the book is to show forth the impact of these boundaries in the texture of people's actual lives, including her own.

The necessity to flee inter-war Yugoslavia had her great-grandfather, for his Bulgarian sympathies, disappear across the lake (to Albania and beyond) leaving his wife behind. Her being left is woven into a family pattern of women being left behind, though later reunited, responding with resilience but also with a sense of perfectionism that overflows into demanding neediness on the next generation.

The necessity to flee Communist Albania has a family building a boat in their basement over nine quiet, paranoid nights; and, making one of the few successful escapes to Yugoslavia. An eight-hour boat ride, each member of the family knowing they will be 'ninety-nine point nine percent dead' if they are discovered. One of the family, at least, will return to post-Communist Albania, having built a business empire in Australia, and will build another at home!

The stubborn necessity to remain as a Macedonian speaker in northern Greece resisting the tide of Hellenization, even after a history of expulsion (after the Greek civil war) and continuing denigration.

Each individual or family story is painted against its historical background or present situation in wonderful vignettes of sparkling, often poetic prose. Even if swift, each story gives you a sense of meeting a person in their complexity, inner as well as of time and place. No one is ever simply a cipher of history, even as they are painted in the foreground of that history. Simple stereotypes of 'ancient hatreds' dissolve on this close inspection of actual realities, lives.

Then there are the lakes themselves - ancient, uniquely connected, water draining into Ohrid through the intervening mountain, through tunnels from Prespa - and different. Ohrid being populated with towns and villages, visited by tourists, a presence who, as the author sinks into it for a swim, seems calming, stripping of identity, inviting of the 'pantheism' that is the underlying, local religion. Prespa depopulated, unvisited, except by the more intrepid tourist in summer, colder in winter, more conflicted by wind and current, where swimming, as the author notices, gives one a spooky sense of something underneath, discomforting. Self and other - but linked - reminding you that despite all temptation to the contrary. your shadow is yours too, to be accommodated, wrestled with, individuated, rather than, as too often, projected onto 'the Other'.

We turn full circle, as the author navigated the lakes, and come back to Naum; and, once more steps into the water, that is waiting for her. The water that flows from its springs, ever renewed, ever-renewing, that reminds us, if we surrender into it, that there is yet something other than our histories, however important, collective or individual, that sits at the core of things.