Showing posts from April, 2014
Show all

- April 29, 2014
The plainest of titles, though the original version was called 'The Story and the Fable', graces Edwin Muir's account of his life up until his departure from the British Council in Rome in the early 1950s.

I am re-reading it ahead of a talk on Muir that I am giving in Totnes in May at the wonderfully entitled 'Consciousness Cafe' http://totnesconsciousnesscafe.co.uk/ (where I am back apparently by popular request (sic)...well, at least, the audience will get to hear some fabulous poems)!

It is a most wonderful book and were I to be cast on Desert Island Discs, it would be one of the two books that I would have to wrestle between as my choice to join the Bible and Shakespeare. (The other would be Patrick White's 'The Riders in the Chariot').

It is so for many feelings. The first would be its account of the intensity of being a child in a place where time was yet not, where every moment was sufficient unto itself, and imagined in innocence beautifully.

"The Heart Could Never Speak"

The heart could never speak
But that the Word was spoken
We hear the heart break
Here with hearts unbroken.
Time teach us the art
That breaks and heals the heart.

Heart you would be dumb
But that your word was said
In time, and the echoes come
Thronging from the dead.
Time teach us the art that resurrects the heart.

Tongue, you can only say
Syllables, joy and pain,
Till time, having its way,
Makes the word live again.
Time merciful lord,
Grant us to learn your word.

"The Heart Could Never Speak: Existentialism and Faith in a Poem of Edwin Muir" is George Pattison's (Lady Margaret Hall Professor of Divinity at Oxford's) imaginative and moving commentary on this, one of Muir's posthumously published poems.

It is a poem that reminds us that we speak because we have been spoken to. Language is a communal gift that comes from love. There is a beautiful passage where Pattison uses Helen Keller's example, emerging from her d…
Post a Comment
Read more

Dostoevsky confessed to his journal that it was 'beauty that would save the world' (and had Prince Myshkin in 'The Idiot' pronounce likewise). But what did he mean?

In part, he meant that in recognising that the world is a gifted creation, holy and beautiful, we would be reminded that we too are gifted into being, and fashioned as 'icons' of God.

Nature is the book in which we read God's presence and respond in worship, transformation, and care (to paraphrase St Anthony the Great).

Bruce Foltz in his 'The Noetics of Nature: Environmental Philosophy and the Holy Beauty of the Visible' explores this theme with lucid intelligence. If we are to 'save the world' (and ourselves for the Creation is one), we cannot rely simply on either 'ethics' or 'pragmatism'. We must learn to see, dwell in and love the world's beauty and see its disordering as a 'dis-graceful' enactment of our failure to be truly human. 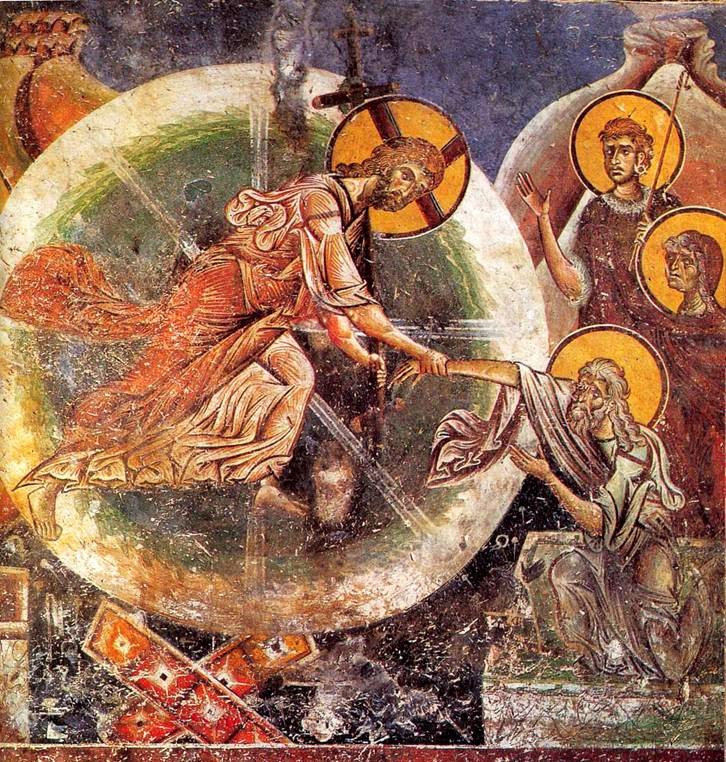 An Anglican priest friend was talking to a class of eight year olds at his local Church of England primary school about Easter.

"Can anyone tell me what happened on Good Friday?" Many hands shot up, "That is the day they killed Jesus," they said.

"Can anyone tell me what happened on Easter Sunday?" Fewer hands were raised with a little less certainty but the answer was clear, "That's the day that He came back from the dead."

"So, can anyone tell me what happened, in between, on the Saturday?" One hand goes up, only one, and the boy says, "Yes, that is the day Jesus went in search of his friend, Judas."

Or, as the poet, Edwin Muir, put it, at the end of his poem, 'The Transfiguration'.

"And Judas damned take his long journey backward
From darkness into light and be a child
Beside his mother's knee and the betrayal
Be quite undone and never more be done."

- April 15, 2014
C.S. Lewis picked up a copy of George MacDonald's 'Phantastes' as a seventeen year old on a railway platform, not knowing what he was letting himself in for, given that this nineteenth century author had already fallen out of favour. It was, he later wrote, like having his imagination 'baptised'.

Baptised in a double sense. First it acted as a confirmation of the faculty of the imagination as a way of apprehending the world, a world enlarged from the patterns of common sense and 'realism', into a more spacious and flexible universe. Second that the tendency of that imagination to be 'polymorphous' (even 'polytheistic') could be aligned within a gifted and searching Christian sensibility.

In many ways it was reading this remarkable novel that sealed Lewis' fate both as a gifted scholar of the medieval and renaissance imagination (where MacDonald's sympathies also lay, coupled with German Romanticism) and as a writer of imaginative fi…
Post a Comment
Read more

Beyond the House of the False Lama

Rather than discover a hidden monastery, fully functioning and graced, in the mountains of Inner Mongolia, in the footsteps of his friend and teacher, the engaging monk Tsung Tsai, the nomadic, sometime poet, Zen bum, George Crane, finds only ruins. He has come to Outer Mongolia, propelled ever forward and escaping a third failed marriage, to the Gobi Desert in autumn, and with his new friend, the filmmaker Jumaand, stand at the place of one of the many monasteries that were destroyed on the orders of Stalin.

Crane is (as his loving third wife intimates as she shows him the door) fabulous to travel with, impossible to live with. He is a man of relentless new directions, that he follow…
Post a Comment
Read more

- April 06, 2014
Newly arrived in Swiss apartment, shelves assembled (two in the living area, three in the study, two in one of the bedrooms) and now where to put which books becomes the question.

Konrad Adenaeur, Germany's post-war Chancellor, first act on entering a new house was to inspect its owner's bookshelves. I do the same at the first opportunity, probably more surreptitiously than he. I expect many people do.
So what would I like people to see? And is it what I would like people to see or a genuine reflection of who I am?
As I happily went about resolving these dilemmas (and there is something satisfactorily physical about sorting, carrying and re-arranging books), I began to notice another pattern that I have noticed before but has never quite struck me with such force (not least for having sufficient space to lay out all the books I have bought with me).
I am both an intuitive reader and one that falls in love.
The first is illustrated by how many 'subjects' might be cov…
Post a Comment
Read more

- April 02, 2014
I remember being taken through Skopje, in Macedonia, by my realtor in the 90s and asking her what she thought of the (relatively) modern Orthodox cathedral in its centre. 'It is too Catholic,' she replied. I puzzled over what she meant until I found a clue in an interview that the philosopher, Jacob Needleman, conducted with Metropolitan Anthony, in his remarkable book, 'Lost Christianity'. Metropolitan Anthony was the long running representative of the Russian Orthodox Church in London. A remarkable man: insightful, holy, penetrating with extraordinary eyes that looking at you felt seen, through and through.

In the interview, the Metropolitan is describing why he had always been revolted by the 'Gothic' in architecture. In it all is ascent, a striving after, something vertical that is absenting itself - it is not a place that you receive as 'home' as you would a Romanesque church (or a traditional Orthodox one), where you are encompassed in a story th…
Post a Comment
Read more
More posts