Showing posts from February, 2015
Show all

Restoring the Soul of the World 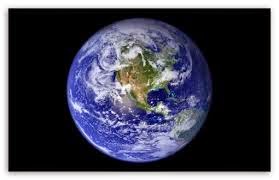 David Fideler, the author of 'Restoring the Soul of the World', will not recall that he once joined in a collective campaign with a waitress in Michigan to persuade her that, though I was without ID, I was of an age to drink (in truth, I was significantly over the age limit and rather touched that people imagined that I was not). It worked and is testimony to his persuasive power.

Such power is evident in his book. He takes us on a journey, beginning with the builders of Newgrange and Stonehenge through the Western intellectual tradition to the new champions of biomimicry and eco-design to show that we inhabit an universe that was if not designed for us (by an external creator) is most decidedly designed with us in mind. By which I mean that the universe is an unfolding reality whose complexity grows in consciousness and that in some important sense creates a perfect location for such as us (and similarly self-consciously aware beings) to emerge. The constants that determine …
Post a Comment
Read more

- February 24, 2015
It is always compelling when you read a book for a second (or X...) time to see what resonates now, different from the previous occasion both because what you attend to will have changed and the person who is attending will have changed likewise. As Heraclitus would say, you never step into the same book twice...

Re-reading Gary Lachman's 'The Caretakers of the Cosmos: Living Responsibly in an Unfinished World' (that I discussed here http://ncolloff.blogspot.co.uk/2013/09/caretaking-cosmos.html), I noticed this time, more explicitly, the discussion of consciousness.

The book's central thesis is the world we inhabit is an unfolding development of the consciousness that brings it into being. It is a thesis that is seen from the perspective of the Western tradition both esoteric, poetic and of the marginalised philosophic and scientific. It is a view that would be 'standard' within the traditions of Buddhism, Taoism and Vedanta, consciousness as the 'stuff…
Post a Comment
Read more

- February 22, 2015
One of the joys of BBC I Player is the 'film category' where all kinds of material pops forth that you would not necessarily go in search of. One form of this is the occasional 'Hammer' film from that fertile factory of the fantastic. Today it was 'The Abominable Snowman' with the wonderful Peter Cushing.

One of the great features of popular culture is that it can explore ideas that if baldly stated in the 'mainstream' factory of idea production (what is rooted in what is currently perceived to be the case) would probably not get a look in and yet enclosed in the comforting word 'fantasy' can be happily explored.

In this case, Cushing is a botanist on an expedition to the Himalayas staying at a Buddhist monastery. So far, so innocent, but he harbours a belief in the existence of the 'Abominable snowman' or yeti and aims to link up with an American expedition that is seeking it. This aim neither accords with the monks nor with Cushing…
Post a Comment
Read more 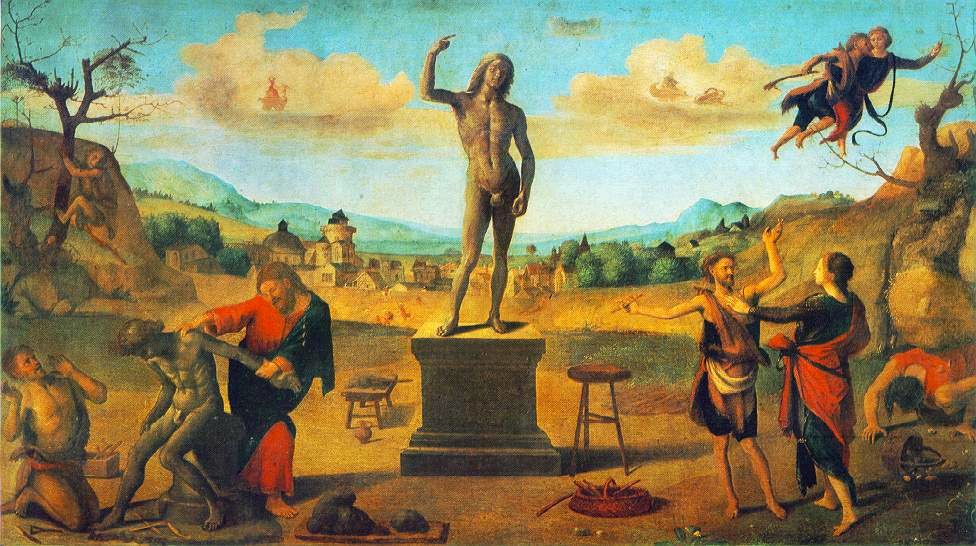 Prometheus making the first man
Yesterday with meetings complete, I went to the National Gallery in Washington
DC to see their exhibition on Piero di Cosimo - 45 works in all - works that embraced the decorative, the mythological and the religious.

When you go to see a major exhibition of a painter's work, there is always an assessment (or reassessment) going on, almost involuntarily. I remember going to the big Gauguin show in London. He was an artist I greatly appreciated only to realise that there was a specific period in his art, associated with his time in Brittany, when there was a perfect balance of aspiration and realisation - a known world heightened, symbolised that is beautiful - and that nothing afterwards, including the whole of Tahiti, that comes anywhere close to it. Indeed in the Tahiti period, there is a straining after revealing the knowledge of people and places that it is obvious he does not wholly comprehend, deteriorating into the merely exotic, so it become…
Post a Comment
Read more 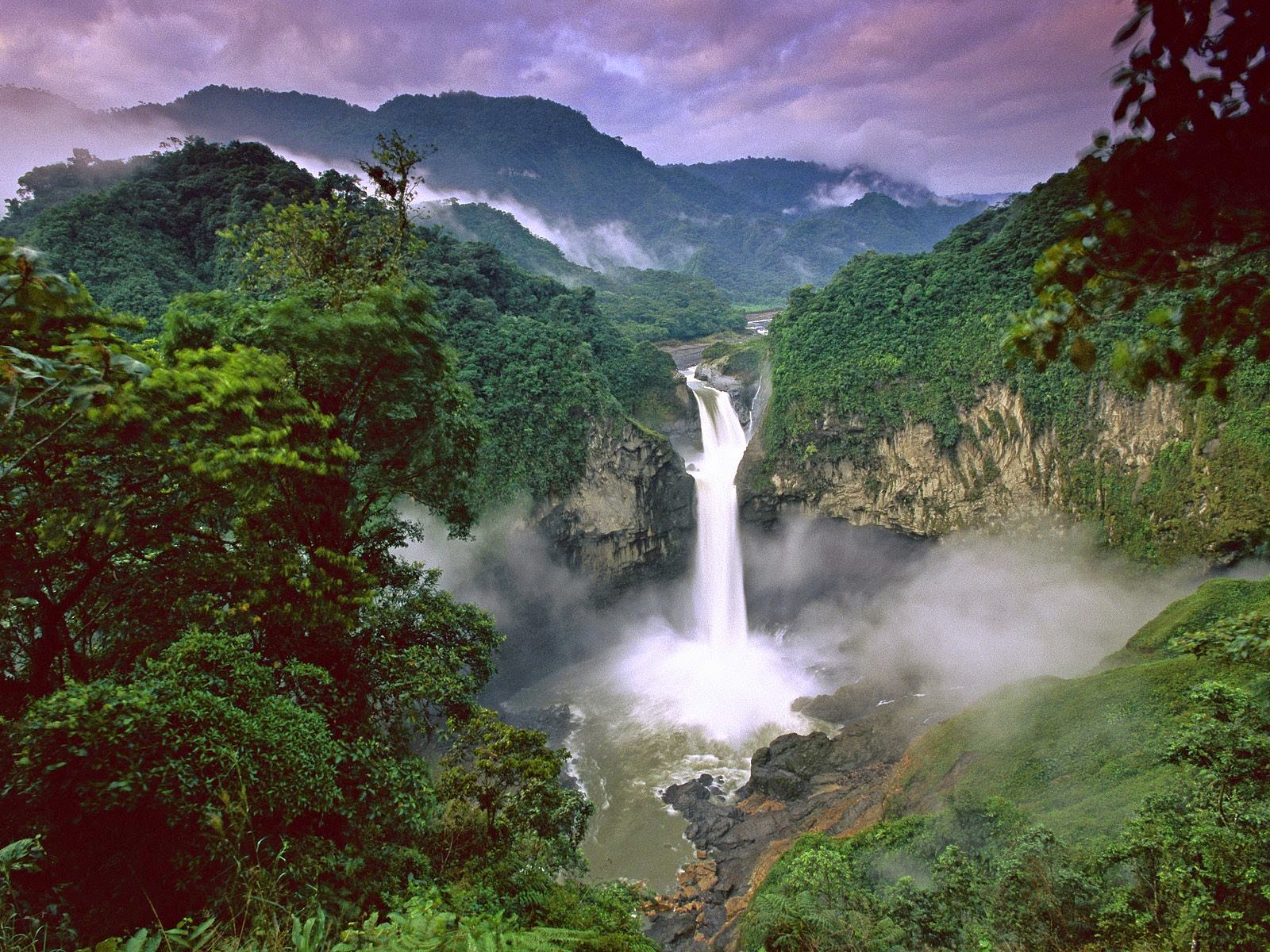 I almost had another life (one of several) when together with Charles Elliott, then Dean of Trinity Hall, Cambridge, we pitched a programme scenario to the BBC that revolved around a series on what we (Western civilisation) might learn from indigenous peoples. It was, at the very last moment, spiked by Alan Yentob, then Controller of BBC 2, because he had not liked Charles' previous series on the 'global Church'. Life might have been very different.

However, the interest remained - the fascination for courteous anthropological literature that rests in careful listening to the lives of others and asks what we might see and learn from the currents of different lives (and why, simply, such diversity ought to be welcomed and celebrated).

One such author is the ethnobotanist and explorer, Wade Davis, who I first encountered unravelling the mysteries of the 'zombie' in Haiti and showing how a botanic (and chemical) mystery was woven within the fabric of social expectati…
Post a Comment
Read more

- February 12, 2015
When I was a child, I enjoyed imaginary cartography and would invent countries, designing maps with political, topographic, economic, and social themes.

With the temperament of an Aries, I never doggedly plugged away at one invented place (as C.S. Lewis did) nor did my imagined landscapes ever become accompanied with a story, as I was a typical factual male, but I remember, even yet, the joy of systematic invention, creating a cohering whole.

I was reminded by this on discovering (and correcting an oversight) that the American author, Wendell Berry, (in 2013) published a further twenty stories of the Port William membership (that I immediately ordered).

I first encountered Berry at the first Temenos conference at Dartington Hall, encountered literally, for having bought a book of his essays the day before, I found him, and his wife, Tanya, across from me at the breakfast table! I wish I had known what to say then, as it haunts me as a lost opportunity, but merely managed courteous pl…
Post a Comment
Read more

"Structures of Consciousness: The Genius of Jean Gebser: An Introduction and Critique" by G. Feuerstein ... (out of print for a long time)...

I was at dinner on Saturday with close friends and was discussing historical cycles. If we had been alive in 1520, say, and were asked who, now, would be remembered in 2020, five hundred years hence, would anybody have answered Martin Luther? Or (to turn the same astrological cycle back one) if alive in 50AD who would have mentioned St Paul or indeed Jesus?

The point being that in times of exceptional transition trend spotting can be exceptionally difficult. What we imagine as dominant could be displaced by the wholly unconsidered.

Thus, Gebser is, outside certain circles, hardly recognised yet, I thought, if he is right about describing an unfolding, evolving structure to consciousness and that description holds and comes to be recog…
Post a Comment
Read more 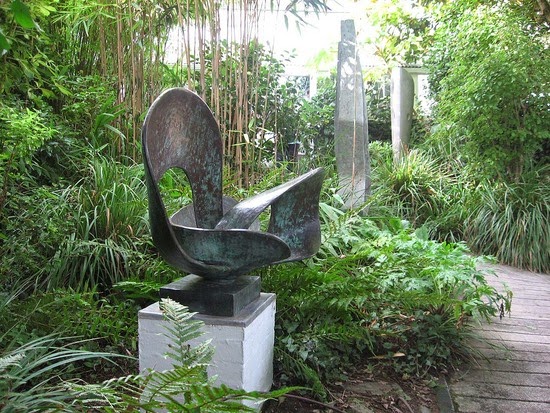 Today I visited the Babara Hepworth Museum and Garden in St Ives on a cold, clear day where the light was that the artists, drawn here, most deeply sought. It has a high, quietly penetrating quality that brings out the subtlest of colouring.

Hepworth was a sculptor of ideal form - seeking the perfect instantiation of landscape and body, the abiding reality under the fluid life of appearances. She succeeded beautifully. Each carved stone, piece of wood, has a rightness about it as if only that form, and no other, could emerge from precisely that piece. They have a calm inevitability about them.

They sit here in a beautifully contained garden, a haven of  stillness, close by the bustling community of the town, where she could work, shape contemplate, part of a place yet apart.