Showing posts from June, 2015
Show all

Madame Blavatsky, the Mahatmas and fields of religious exploration

- June 30, 2015
Madame Blavatsky was a difficult woman. She was impetuous, given to exaggeration and emotional; and, often, possibly too trusting or a poor judge of character. Even her Masters acknowledged this. Yet they needed a gifted clairvoyant and one who was undoubtedly, sometimes recklessly, kind, both of which, by all accounts, Blavatsky was. She once sold her first class berth ticket, thus going steerage, to ensure a family, sold counterfeit tickets, could board ship - a family she had never met before. And though people have tried very hard to discredit her clairvoyance (indeed her in total), something yet remains, irreducibly offering pause for thought at least.

Edward Abdill is a 'believer' - a long time Theosophist and speaker and lecturer for the society - but his attention in 'Masters of Wisdom: The Mahatmas, Their letters and the Path'  is not on her but on her teachers.

Is Christianity (or Hinduism) a Prada handbag?

- June 24, 2015
Walking to work this morning, I was thinking about Dom Bede Griffiths, the English Benedictine monk, who, in his forties, went to India and founded (or refounded) two monastic ashrams that sought to bring elements of Christianity and elements of Hinduism (and other religious traditions) into fruitful experiential dialogue. He was a Patron of the Prison Phoenix Trust, that I helped found, and often wrote encouraging and insightful letters both to prisoners and myself! We finally met on his last visit to England before his death - a man of gentle calm and depth (though often a scourging critic of patterns in his own Catholic tradition).

Over lunch I casually looked up his Wikipedia entry and saw a reference to a critique of his writings (from a traditionalist Catholic website) http://www.catholicculture.org/culture/library/view.cfm?id=3427 that I found fascinating.

- June 23, 2015
When I was staying at the Forest of Peace Benedictine ashram in the Osage hills near Tulsa, Oklahoma, at the behest of the community's founder, the wonderful, Sr Pascaline, I once took Jesus walking with me, into the forest, to a bluff overlooking the Arkansas river. It was an exercise in Ignatian imagination. What would it feel like to be in Christ's presence in a place that was so deeply real, wholly itself, forest being forest? Could I be really myself, faced with the one member of the Trinity with whom I had the most difficulty?

God the Father and God the Holy Spirit - these I could sense as presence - the anchoring reality and the creating gift - but Jesus had always remained intimidating. He was an embodied person and a person who could see through me in my bodily self as probably a fake and a fraud.

We sat together, on a bench, looking down at the glistening river, and I had a deep sense, to quote Julian of Norwich, that in Christ there was no forgiveness because there…
Post a Comment
Read more

- June 14, 2015
'Eyeless in Gaza' is often seen as Aldous Huxley's most important novel, written shortly after his great success with 'Brave New World'. It got him into trouble.

First because some of its characters were seen as too thinly disguised being based on people Huxley knew (or had known). This was a familiar, perceived failing.
Second because in it, for the first time, his conversion was clear. If he had not 'got religion', he had overthrown his satirical self for a hoped for spirituality, focused on the cultivation of love and compassion (though being Huxley, he had not lost a sharp eye for human failings [and foibles], not least, in his central character, Anthony, who was closely modelled on himself).
Third because in it he avowed pacifism, undiluted and unapologetic, just at the moment, in 1936, when many of his peers were discovering Communism and the need to resist fascism by force in the nascent battle lines of Spain.
This being a novel of ideas, many of …
Post a Comment
Read more

- June 11, 2015
I was thankful reading 'Braiding Sweetgrass: Indigenous Wisdom, Scientific Knowledge and the Teaching of Plants' that, in fact, I have planted a tree or two - in Devon on the land of a friend - amongst the three thousand or so he planted in the last decade of his life. I could tell myself that, at least, I had made one act of reciprocity towards the non-human world that sustains and cares for us, as we, more often than not, ignore or even disdain it (if not always in our thoughts, often in our actions, conscious and unconscious).

It is to raising our awareness of the responsibilities we owe that Robin Wall Kimmerer turns her considerable gifts - as a poetic writer, an indigenous Native American and a distinguished botanist - in this marvelous series of essays.

In the way that sweetgrass to be braided requires reciprocity -one to braid and one to hold - so to all our actions, in the world, need to be conducted into and out of a web of holding relationships, of a wider communit…
Post a Comment
Read more

I Heard the Owl Call My Name 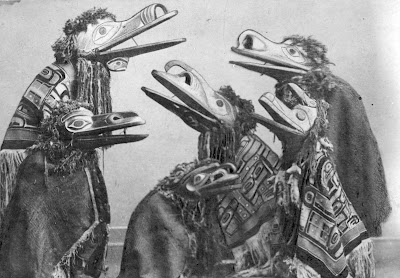 I found myself reading this beautiful, short novel by Margaret Craven, "I Heard the Owl Call My Name" in a week when, sadly, once again, a commission calls for reparation for the cultural genocide inflicted on the First Nations in Canada through the long running policy of enforced education that removed First Nation children from their homes and imprisoned them in residential schools that were unrelenting hostile to their origins and culture http://www.economist.com/news/americas/21653631-making-amends-cultural-genocide-truth-and-consequences

The book has the quality of a fable but many of the questions and issues it touches on are familiar, all too familiar to indigenous people as they seek an uneasy accommodation with the world. They watch as their traditions unravel as their children are increasingly pulled towards the outside world. They watch as their children hold that world as a standard against which to judge their behaviours. They all, elders and children, find the…
Post a Comment
Read more 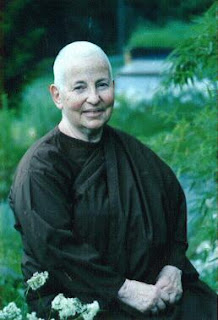 Once attending the annual Eckhart conference in Oxford, I listened to a compelling talk by Ayya Khema - a German Jewish woman who at the age of forty eight had been ordained as a Buddhist nun in Sri Lanka. It was compelling, firstly, because of her presence - calm, poised, kindly with an edge of appropriate detachment and discipline; and, secondly, because she imparted simply the most useful advice on meditation I have ever received (to date) - on how to deal with distraction.

This was to compile a simple vocabulary that provided a classifying order for your distractions and when you found yourself distracted, as I often do, simply draw on the word list for the most appropriate one, gently name the distraction, and return to your point of focus. It works, mostly beautifully, and I have been grateful ever since.

In reading her autobiography this week, mostly on an aeroplane, I realized the remarkable life that had given birth to her presence. Remarkable both for the diversity of its e…
Post a Comment
Read more
More posts