Winifred Knights: art in service of the vision of equality. 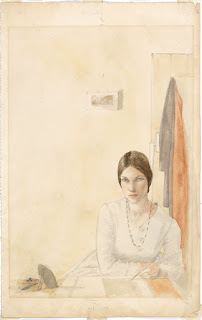 'Self-portrait' by Winifred Knights.
I first consciously encountered Winifred Knights in 2016 when the Dulwich Picture Gallery hosted a wonderful exhibition. One of the benefits of such exhibitions is that they provide the occasion for the accompanying catalogue or monograph: a publisher can take the risk! The curator of that exhibition, Sacha Llewellyn, produced a highly sensitive, beautifully produced study, 'Winifred Knights' that I have been reading (and looking at).
Her first love was people in nature, people engaged in the harmonious business of living within a traditional landscape. She was a product of that moment at the end of the nineteenth and beginning of the twentieth century when a recognition of what was being lost in industrialization and urbanization was coming to the fore; and, that recognition was balanced between a realistic appraisal/critique and a sepia-tinged nostalgia.
One of the formative influences on her was Edward Carpenter, somewhat lost to…
Post a Comment
Read more

A Landscape to Light "The Lost Chart" is not Neil M. Gunn's finest hour as a novelist. The plot - a lost naval chart, fifth columnists, in this case, Communists, espionage and impending, possibly nuclear war - always comes across as a 'deus ex machina' on which to hang certain key observations and conversations woven into the book, even the characterization of the conversation holders feels weaker than it ought to be; and, for Gunn traditionally is. I failed in my first and second times of reading it thinking to put it aside as the exception in his oeuvre. It, however, niggled away, and remembering sufficiently where I had broken off the last time, I thought, 'third time lucky'! And, I was!For at the heart of the book are a set of arresting vignettes of thought which are as timely now as when they were penned. The first of which is where too now? The world it appears has not moved on from being a place poised on the edge of destruction trapped betwixt flailing capitalism that…
Post a Comment
Read more

Disappear so that genius can appear: Life behind the Mask. 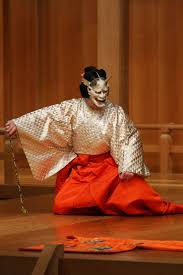 When I went to the first Temenos Conference on art and the renewal of the sacred at Dartington Hall, one of the highlights of the program was a studio performance (with masks but no costume) of Japanese Noh drama with an accompanying lecture. I was transfixed. For two hours I sat (in their remarkably uncomfortable theatre) simply absorbed in the compelling flow of engaged feeling, bound in a ritual of gesture, sound, and music. This was surprising since most of my ventures to the theatre (before and since with notable, if rare, exceptions) are best characterized as ventures in patience, followed by disillusion!

Thinking it might be a 'fluke' of place and circumstance, the next year, I discovered a Noh troupe was in London and here I could experience a full, costumed, ritualized performance. No fluke, once more I was mesmerized and left the theatre a few inches from the ground, thinking, 'This is what theatre is'.  A world beyond simple naturalism, an archetypal world.…
Post a Comment
Read more 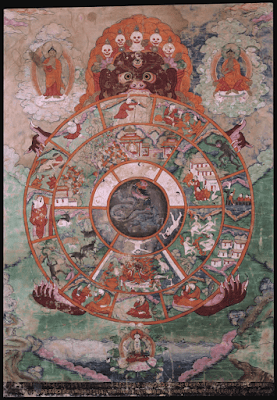 The Wheel of Existence, 18th century, Eastern Tibet.
Marco Pallis was a myriad gifted man: a mountaineer, a musician, and a metaphysician. His book, 'Peaks and Lamas' is an enthralling account that draws on all three gifts.

It is, as the author forewarns at the beginning, a composite book where we literally climb to the limits of the sheer physicality and mental toughness that a mountaineering ascent requires; and, explore inwards into the subtlest dimensions of the human spirit. In the middle rests how both the topography and the religion of the Himalaya have shaped diverse cultures but, most importantly, the Tibetan.

The book was written out of two expeditions in the 1930s, neither of which, to Pallis' deep regret, involved permission to enter Tibet (that would come in 1947) but ones that both, in Sikkim and Ladakh, enabled him to taste the depths of place and tradition.

Tradition was a deeply important word for Pallis as a Traditionalist, a member of the 'school…
Post a Comment
Read more 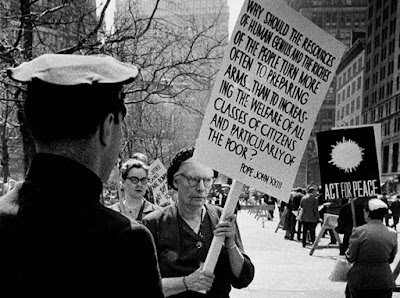 When Pope Francis addressed the U.S. Congress in 2015, he chose to single out four 'morally exemplary Americans'. The first two were obvious, known choices; Abraham Lincoln and Martin Luther King. However, the second two, Catholic choices, probably had many of the journalists present scrambling for Google search. They were the Trappist contemplative monk, Thomas Merton; and, the founder of the Catholic Worker, Dorothy Day.

None were chosen as moral exemplars of family life but of their social witness grounded in a living faith. This may have been part of Francis's point as he repositions the Church from a focus on the bedroom towards social action. They all remind us that to be an exemplar does not mean for us to be perfect.

Dorothy Day, for example, had, to put it in the vernacular, 'one heck of a life' that is ably told in John Loughery and Blythe Randolph's new biography, 'Dorothy Day: Dissenting Voice of the American Century'.

A hairbreadth decision, a lifetime lived under its shadow. 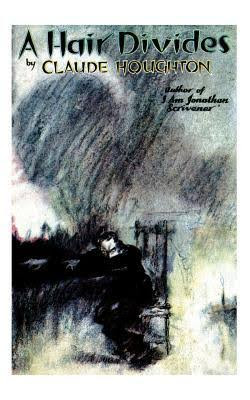 At the risk of turning this blog into 'The Claude Houghton Appreciation Society', herewith a fourth of his novels reprinted by Valancourt Books, 'A Hair Divides'.

Gordon Rutherford is an aspiring writer who in a split moment must decide whether or not to admit to the accidental death, in unlikely circumstances, of a recent acquaintance in fear that he will be accused of his murder. He decides not to, hiding the body, with fateful consequences. For twenty years, his undiscovered act follows him, reaping its ably described psychological consequences until an encounter with a third person, his acquaintance's female companion at the time, the book rolls to its denouement: with its potential for exposure, prosecution, and death - and yet hauntingly, in t…
Post a Comment
Read more

Harrowing at every moment 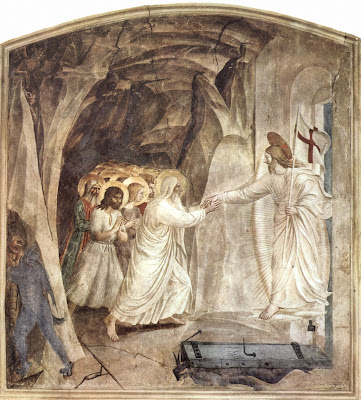 "Half way along the road we have to go, I found myself obscured in a great forest, Bewildered, and I knew I had lost the way."
So opens Dante's Inferno, the lines echo through the title and the opening pages of Claude Houghton's novel, 'Julian Grant Loses his Way' except in Grant's case the forest is rendered contemporary, we are in the West End of London in the 1930s; and, as we are to discover towards the end of the book, this is not a vision of the afterlife, it is a vision from the afterlife.

Grant finds himself adrift, on his way to a destination, yet unsure which. He stops off in the Metropolitan Cafe to drink a cocktail and gather his wits because the world has been behaving unwontedly strange. He has had a crystalline vision of memory - two people stand on a beach in Cornwall, looking out to sea. It is deeply familiar and he finds himself moving towards them to get a better perspective, to aid memory. As he approaches, he realizes that one of the…
Post a Comment
Read more
More posts