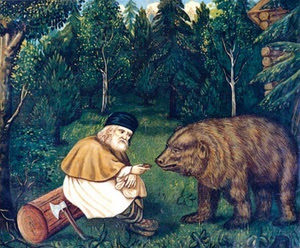 When the novelist and journalist, Arthur Koestler, visited Japan in the late 1940s, one of the people he wanted to meet was Eugen Herrigel, author of the spiritual classic, 'Zen in the Art of Archery'. This beautiful account of the cultivation of attention within a meditative path is justly acclaimed so it came as a shock to Koestler that Herrigel appeared not to have renounced his profound sympathies with National Socialism in spite of the stark, post-war revelation, of the human costliness of its essential depravity. Without a framing intention and a guiding telemetry towards a transforming goal, the practice of diligent mindfulness can sharpen your awareness to no necessary good effect!

My brief in giving a day to the regional gathering of Christian Meditation groups, affiliated to the World Community for Christian Meditation, this Saturday was to help people think around - what is it that support and sustains the direction of our meditative practice and what meaningfully might emerge from it. What are the wider spiritual practices that shepherd it towards holiness?

Rather than treat this in the abstract, I chose three lives to talk about, all of whom with their attendant difficulties, describe an arc towards transforming holiness. I chose three Russians - two saints and a deeply insightful 'sinner' - St Seraphin of Sarov (pictured), St. Maria of Paris and the novelist, Dostoevsky (who shared with Herrigel an unredeemed Antisemitism, however, much progress he had made in other respects). It was, also, an arc from the inward focus of the hermit St. Seraphim, through introspection consciously organized for an audience of story teller, Dostoevsky to the practical extroversion of loving one's neighbor exhibited by Mother Maria.

Some practices they shared in common, two of which struck me as particularly relevant and resonated on the day with the participants.

The first is the cultivation of good memory. The conscious act of storing up moments from our past, especially our childhood, when others said or did something that nurtured our consciousness of the good and challenged us to do better. Dostoevsky remembered all his life when a disastrous fire further impoverished his family by burning down their principle home and his nanny spontaneously offering his mother her life savings (500 rubles) to rebuild. An offer Dostoevsky's mother kindly refused. He actively recovered such memories at times of stress -when, for example, he was in prison and both unable to bear his fellow inmates and unable to bear feeling for them in such a negative way; and, seeing how they tipped him in a more positive direction. He allows Aloysha in the Brothers Karamazov to offer a short speech at the graveside of Ilyshecka to describe how this works. Equally both Seraphim and Maria adopted a similar mechanism of internal remembrance.

The second, and related to this, is the choice of attitude. We often cannot choose our circumstances but we can choose our attitude to those circumstances. Good memory might give us, as it were, the right flavor and example, meditation can give us the right capacity and awareness. In this regard, I told my favorite story emerging from my work with people in prison. William was a young offender who one day was helping carry a billiard table across the prison. The table was too heavy, the door to pass through too narrow, too few people were 'helping'. All circumstances that previously would have stressed out William leading to some unhappy, angry and possibly violent reaction. Instead William found himself telling jokes, the atmosphere changed, the table lightened, the door widened and the table arrived safely at its new destination. "If that's what you can do," said the prison officer, who witnessed this event unfolding, "keep doing it"! (It was a course on attitudinal change and meditation that William was six weeks into). William himself described it later as for the first time having 'space in mind' between his (usual) reactive self and what to do - and finding he could chose what to do, respond rather than react, navigate the situation differently and more wisely.

Mother Maria beautifully describes facing the death of her daughter from meningitis and rededicating herself to be a mother for all. A motherhood that would eventually see her arrested for helping Jewish refugees escape the Nazis in occupied Paris and herself dying in a concentration camp where her attitude was described as simply, and continually, that of a good mother.

Turning down the Abbacy of his monastery in 1807, St Seraphim is landed with Fr Niphont, a radically different character to Seraphim, worldly, clerical and officious, who makes Seraphim's life exceedingly difficult and for that of the nuns under Seraphim's care. Seraphim is a scandal to this man of presumptive dignity. He is often seen without his habit in an ordinary peasant's smock and his relationship with the nuns, free and caring, leads to all kinds of unwarranted gossip - the bane of monastic life. "For my own part I am not in the least scandalized at scandalizing everyone" Seraphim declared, "The greater fault lies with those who take scandal rather than those who are said to give it."

We choose our attitudes - and a spiritual life rooted in meditation and informed with a range of intentional reminders of its purpose and direction, that illumine that deepened awareness, can aid us to do so,

I confess to having been 'over-ambitious' in trying to weave three remarkable people drawing lessons for the spiritual life and meditation practice into one day but it appeared to be a well-received experiment on which I hope to build and refine!