Learning to pray with the Russian pilgrim 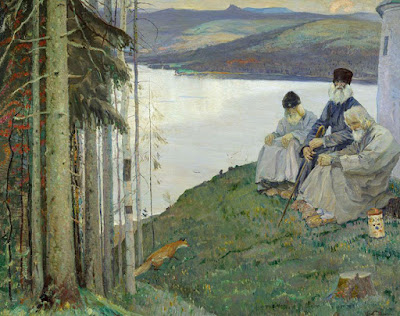 When I was at university, there was a 'mission' - three evenings - the first the former Archbishop of Canterbury, Michael Ramsey, the second the 'double act' of Archbishops Sheppard and Warlock and, finally, third, Metropolitan Anthony of Sourozh. All three days were interesting, the last was compelling; and, as was my way, I wrote to Metropolitan Anthony and found myself sitting in his kitchen, drinking tea, and receiving instruction in the Prayer of the Heart (or Jesus Prayer) that sits at the centre of Orthodox Christian spirituality. The Metropolitan helped to 'baptise' my meditational practice that ever since has been an exploration into the mercy and compassion that is at the heart of silence.

I had been made aware of the prayer by reading 'The Way of the Pilgrim' that is an anonymous text, published in Russia in the second half of the nineteenth century, that is probably best known (outside of Christian circles) for being placed as a central "character" in J.D. Salinger's extended short story, 'Franny and Zoey'.

Re-reading it now, in a new translation by Anna Zaranko (in Penguin Classics), I was struck by both what is remembered and what forgotten.

Remembered was that it is an exemplary and engaging introduction into the path of 'praying without ceasing' whereby you bring all your attention to your heart, breathing in and out with the prayer, to that centre such that, slowly, it becomes integral with the very texture of your life. It remains a very practical guide to the Jesus Prayer and addresses many of the potential difficulties of putting it into practice; not least, with artfully constructed references to the Philokalia. This is a collection of texts of the Church Fathers designed to give one a comprehensive understanding of prayer in its practical and theological significance. The author shows exemplary gifts in the appropriate manipulation of this text. A text that had been translated into Russian in the eighteenth century.

Forgotten was how infused the text is with the uncanny - whether the miraculous or the synchronous or the merely strange. The author lives in a world where dreams speak - his holy elder appears regularly to help him in his prayer practice, where synchronous events are commonplaces and where the miraculous is always simply a threadbare curtain away, that when lifted is simply there, naturally assimilated into the text. Though in the later sections, there are the customary references of warning to paying too much attention to dreams or the imaginary, these appear less forceful, an afterthought, to the reality in the tenor of the text itself. This is a world in which the 'psychic' plays a real role (for good or ill) in finding one's way.

What I did not fully see on first reading was how consciously and artfully the whole text is constructed. If the unknown pilgrim is the genuine author of the text's experience, then its substance and ordering show the hand of one or more editors who have a significantly more sophisticated and articulate agenda to the point where one begins to wonder whether the 'pilgrim' is himself an artful construct?

That pilgrims wandered from holy site to holy site in Russia (and beyond - the pilgrim hopes for both Mount Athos and Jerusalem) was a compelling feature of nineteenth-century Russia, and nothing the pilgrim endures, experiences or comes to understand in any way strikes a false note (he feels real) but nevertheless the text suggests a guiding agenda rather than a simple memoir, the simplicity is artful.

There is a clear juxtaposition between the validity of experience rooted in the practices of faith over a too intellectual approach (represented by a wandering professor who becomes a foil, a man waiting for correction by holy elders); there is the ongoing debate between the Church and Old Believers (seventeenth-century schismatics) that is a feature of nineteenth-century literature (for example in the stories of Nikolai Leskov); and, there is a notably (for its time) liberal view of Jews (and other non-Christian believers) who ought to be tolerated (and prayed for) rather than despised (and indeed can carry, in partial form, significant truths). None of which might have been 'alien' to the pilgrim but he would have been immersed in them, as daily experience, rather than noticeably reflective of them as here.

All in all, I came away wondering who our author was - and how brilliantly they had created a text that breathes the personality of its apparent author, even though that 'author' was most probably a work of imagination.

What is imagined, however, is a masterpiece of practical, spiritual theology that gives a questing figure to accompany one on one's own journey inwards - and that continues to inspire people to take those steps that lead to 'praying without ceasing', liberating the spirit within to align with Spirit throughout all, and step into the light that is Christ. The 'pilgrim' lives because his imagined truth is real.