Who is Jonathan Scrivener? Who am I? 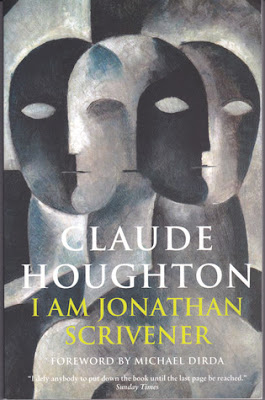 All the protagonists (except its narrator) have met him, all imagine, even if the acquaintance was brief, to have understood him but do they and what is the meaning of Scrivener appointing a man he has never met as his secretary?

This secretary, James Wrexham, is the narrator of Claude Houghton's imaginative, beautifully paced, and ultimately mysterious novel: 'I am John Scrivener'.

Wrexham trapped in a 'dead-end' job and enfolded in a lonely life sees an advertisement for the job of secretary to a man of means. He applies, is appointed without ever meeting his employer, who has gone abroad, and takes up residence in Scrivener's London flat, soon he finds himself immersed in the lives of four people, all meaningfully different, (two women, two men) whose lives have been influenced in unsettling ways by interaction with Scrivener and all of whom want to see him again.

The novel unfolds in the London of the 1920s as Wrexham's pursuit of understanding Scrivener, what he means individually and collectively to him and to these other four protagonists with whose lives he intersects. Is Scrivener, a highly talented man yet with no specific accomplishment to his name, experimenting with them and their interactions and if so why?

Houghton was a successful novelist of the 1930s-50s whose work had fallen into neglect until resurrected by the wonderful Valancourt Press, based in Richmond, Virginia. He was praised by the likes of Graham Greene, Henry Miller, J.B. Priestley, and Hugh Walpole indeed Miller found one of his novels so insightful about his, Miller's, own inner life situation that he initiated a long, lively correspondence with Houghton, subsequently published.

At heart, the novel explores whether or not we ever actually know anyone. (including ourselves). Do we not all, even if subtly and unconsciously, adjust to our audiences such that even our closest friends, even our families, see only a dimension of our selves yet, form the other side, we imagine that particular dimension is what 'sums them up'. Our own perceptions are always the best arbiters of knowledge. And, what if, a person comes to us who is doing this consciously, living out in every encounter, wholly and utterly, this one dimension, holding the others in check? Would we not both be confirmed in our assumption of 'knowing them' and yet be unsettled intuiting yet other depths and dimensions? Especially if this dimension, as is implied in Scrivener's case, to be that one which accentuates our own mirroring characteristics? Our own most characteristic self.

Reading it I was reminded of Gurdjieff (and whether this is my projection or an actual resonance, as it might be with J.B. Priestley for example, I do not know). But Scrivener reminded me of that Armenian magician whose response to each person he met (and therefore their perception of him) was conditioned by a conscious practice of unsettling people by helping them to recognize that they are, and in what way, asleep. There is a particular moment when Wrexham refers to most people 'being dead' before they die' and the apparent 'trickster' nature of Scrivener that certainly suggested this to me. Meanwhile, the portraits of all five key protagonists exhibit wholly credible ways (in different types of person) why, and in what way, in each case, this might be so.

This, of course, prompts the question in the reader: how might it be so in me? In what way am I asleep adrift on a barely recognized characterization of myself?

In any case it is a book that is remarkably fluid, holds the necessary tension of its mysteriousness until the very end and beyond, and is peppered with acute psychological and social observation - even a brief paragraph on politics that unhappily mirrored Brexit - with the Conservatives in control, primarily opposed by other Conservatives and the Labour opposition trapped in ineffectual introspection and backbiting!


Why then the neglect? Partly because I think there is a way you could read the novel as 'allegory' - each of the characters representing a type rather than a person and that may not chime with an age that wants full characterization and nuanced psychological realism; partly because there is insufficient 'background' and, therefore, lack of period interest to overcome a certain datedness of expression; and, partly because it is undoubtedly and unashamedly driven by a personal 'mysticism' that may be of minority taste! He is, however, undoubtedly a novelist I would like to read more of.