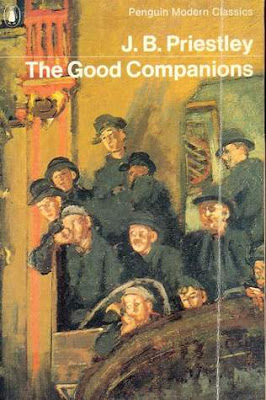 It was as if Dickens found himself seen as the author of 'The Pickwick Papers', that everything he did was seen through that lens alone or, to use an appropriate theatrical analogy, Priestley found himself typecast. Like, say, the great Richard Briers always being seen through the lens of having 'been in' the exemplary BBC television comedy, 'The Good Life' but never being seen for his performances, say, in Shakespeare.

It is an apt comparison because, as with 'The Good Life', 'The Good Companions' is an exemplary novel of its kind. In this case, a picaresque tour de force that takes three disparate 'amateurs' and plunges them by coordinated accident into the world of the concert party and the theatre in the inter-war period. Miss Trant, a spinster, recently liberated from looking after her elderly father, Inigo Jollifant, a young bachelor schoolmaster, who discovers a better talent for music making than he does teaching; and, Jess Oakroyd made redundant from his factory in Bruddersford (Priestley's native Bradford) to set off from an unhappy marriage onto the open road and the mysteries of 'down South'.

If you do not find the depths (and experiments) to which Priestley can take you, you do find a cavalcade of character, incident and observation that brings its period and context to abundant life and like all truly living things, it can step out of its immediate place in time and space and touch the universal.

Not least in the fact that everyone proves to be lovable, even the villains are seen as trapped in their circumstance, behaving as you might if so limited. They are overcome, rather than redeemed, but their stories, as their characters, are left unattended and open, so who knows what possibilities lie beyond?

It is, also, a novel that even with it's heightened comedy, is deeply realistic. The economic depression and its consequences, the divisions between class and between 'North' and 'South', the attractions (and otherwise) of a theatric life, people's basic goodness and the unwinding possibilities of circumstance that invite us to be less good than we might be; and, the accidents of fate that might yet be something other.

The narrative unfolds with bold elan - never really stopping to catch breath - saturated with incident - some central to the plot, some diverting like Jollifant's encounter with religious cult of the Second Resurrectionists piously waiting for the immediate end whilst enjoying bounteous teas and the happy thought of their election!

You can see why Priestley ought to be fiercely proud of this remarkably enjoyable and able novel that makes its readers identify with such a disparate crew, root for their happiness, and rejoice in, if not that rare attainment, life trajectories that have diverse possibilities for meaning and quiet satisfaction. At the same time, you can recognise his wariness. This is not all that Priestley can do. There are more reflective, serious matters to attend to - that he will given time.