Without vision the people perish... 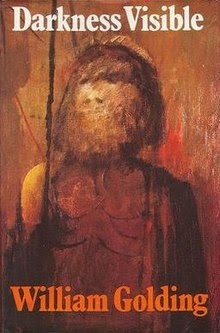 John Carey in his admirable biography of Golding says of  "Darkness Visible" that a simple summary of its plot would sound preposterous and, agreeing, I will not try here.

At its heart are three figures. Matty, an eccentric who appears out of the fires of the Blitz in war torn London hideously disfigured by fire. Mr Pedigree, a pedophile school teacher, whose life enters a downward spiral having been betrayed by Matty`s remorseless honesty.  Sophy, who with her twin Toni, grow up in the same town that connects Matty with Mr Pedigree and where their failed attempt to kidnap a child from a local public school brings the denouement that is Matty`s death and Mr Pedigree`s presumed redemption.

The outward narrative that connects these three figures together is, as Carey notes, mostly unbelievable and yet this detracts from the novel not one whit. What matters consistently is the inward dynamics that propel the principal characters outward actions and here Golding`s vision is remarkable and moving.

Matty, whose origin always remains opaque, is at one level a man with a disability of a limited intellectual range who to all outward observers is condemned to his apparently nomadic life and whom is to be pitied. This pity is mixed with dislike less for his appearance than for his rigorous qualities of truth telling, honesty and literalness that discomfort. Inwardly, however, he is a man on a mission and his steps are guided in their meaningful patterning by angels, seen in dream and vision. Matty is an unconventional saint in the making. All of which is beautifully realized by Golding - we see Matty`s life through his eyes played straight as only Matty knows how.

Mr Pedigree is likewise depicted in all his failure as a man compelled by his own vision of childlike beauty but unlike Matty his vision binds him to a pattern of behavior that hurts others and degrades himself (except in his own eyes). It becomes Matty`s task to secure his redemption.

Sophy is driven by an exact absence of vision - the world in its entropy is winding down - nothing has any obvious meaning; and, thus, to quote Dostoyevsky`s Ivan Karamazov anything may be permitted. In the face of the void of nullity why not commit outrage, kidnap a wealthy child, make sufficient money to keep afloat in that very void, winding down yet in style. Though Golding hints that Sophy too, in her past, had a moment when vision was offered and yet was declined.

What weaves the whole then is this continuous notion of both the value of vision and its ambiguity. Without it we perish, shrivel, wind down but left on its own it can lead us astray - either to the boundaries of madness that Matty fears or to the misplaced, twisted obsessions of a Pedigree.

There are here, in the world of the novel, no place where visions can be tested - when Matty tries in various churches he is met mostly with incomprehension; and, ironically Golding has the church in the town where the action unfolds turned into a community center.

Yet in spite of this pessimism, Golding`s cosmic optimism does come into play at the end. Matty dies saving the boy from kidnap, dying the way he came in, in a ball of flame and Pedigree in dying too is welcomed beyond by Matty with penitential fire.

Preposterous? Only if one cannot imagine a world where all striving is striving for the good yet many are the ways it can go astray and if one cannot imagine a world into which grace speaks. In other words, a world stripped of the sacred. Golding oscillated back and forth when asked the question as to whether he was a Christian but as T.S. Eliot, his publisher, would have noted, his books are saturated with an implicit Christianity that makes them more, not less, compelling as raids on the commonwealth of God.