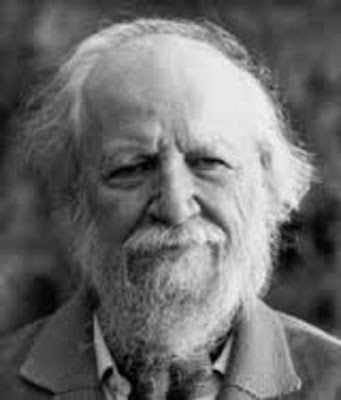 I was on my way to bed on Tuesday night and found myself contemplating Andrei Bely's "Kotik Letaev' his experimental novel that follows a child from birth onwards capturing the unfolding of its awareness whilst mirroring Rudolf Steiner's understanding of the development of consciousness. What, I found myself thinking, do I really think about Rudolf Steiner? The next day, over breakfast, I open my current book, John Cary's excellent biography of William Golding and within a page, I learn that Golding's first teaching appointment was at a Steiner school (as one of his lifelong friends, met at Oxford, became a minister in the Steiner inspired, Christian Community). Golding himself, whilst initially impressed by Steiner's work, found Steiner's followers less appealing. I smiled at the coincidence and thought no more of it.

On Wednesday evening, I found myself thinking of how and when did my early, thirteen-year-old, introduction to Transcendental meditation trigger an awareness of a Christian meditative/ contemplative tradition. An awareness that would lead eventually to a 'baptism' of my practice and guidance in the Jesus prayer from a Russian Orthodox bishop. I remembered it was finding a book called 'The Journey Within' by F.C. Happold (and subsequent purchase of his Pelican study and anthology of mysticism that I still possess). I open my Golding biography and begin to read. Golding has now decided to study for his education diploma at Oxford which requires a teaching practice. This practice is at a day school in Salisbury presided over by a headmaster called Frederick Happold. Happold is the first person to genuinely perceive imaginative quality in Golding (and though Golding was never a diligent teacher appears to have kept him on until the success of his writing finally freed him). They were the same Happold.  So twice now opening the book on consecutive days, the text has immediately responded to my prior thinking.

On Thursday evening, I come home to find two books had arrived, triggered by reading Elizabeth Krohn and Jeffrey Kripal's 'Changed in a Flash' about Elizabeth's extraordinary near-death experience and Kripal's scholarly and sympathetic commentary. The books in question were, Charles M Strang's 'Our Divine Double' and Anthony Payne's 'The Daemon' (the first referenced by Kripal, the second remembered by me) that both treat of the ancient notion that each person is 'two-fold' an earthbound presenting self and an angelic or divine twin who, if allowed, acts as a luring guide towards the good (in Socrates' version at least). I place them on the ever growing/going to be read pile and settle down to Golding. I turn the page and we are in a discussion of Golding and his inspiration and his imagination that he is a double self! Three is undoubtedly a crowd; and, what can one do but laugh heartily (and pay attention) for the 'daemonic' is abroad!

I should say that though I have read several of Golding's novels with appreciation, I knew nothing of him except the oft-repeated, and the true, story of how he named his friend's, James Lovelock's theory, 'Gaia'.

It was a happy patterning of the synchronous (and interestingly feedbacks to something Kripal notes in his commentary that the act of reading his books on the super-natural have often triggered in their readers' examples of the weirdly congruent 'super natural' or so his readers' report). Indeed, I too have noticed that when you do pay attention, surprise, surprise, things emerge into it.

Ironically, though Carey is a very sympathetic biographer and reports Golding's own encounters with the uncanny faithfully as an apparent 'secular humanist' he tends to assume they are 'imaginary'  or 'illusion' (as simply belonging to the author's own emotional life) yet Golding's own handling of them - both biographically and in his fiction - make of them more genuinely 'liminal' - neither simply projected nor simply an objective phenomena but a complex 'inter-subjective' weaving between the world and its observer/participant; and, a participant who intuits (if not always believes) in an 'other world'. I, also, noted in passing that Carey observes that mechanical and electrical equipment of any and every kind often simply would not work with Golding, breaking down regularly. This too resonates with Kripal's exploration of Elizabeth Krohn's experience after her NDE (triggered by a lightning strike), she too exhibits the common phenomenon of people touched by the 'other' of having (in her case electrical) equipment explode, malfunction or simply die!

Meanwhile, I am left pondering both Golding's literary genius - and the need to add to the ever-growing pile especially 'Darkness Visible' that appears to cleave most closely to the intuitively imagined of all his novels - and what my synchronous events may suggest. One thing they did immediately was to reaffirm my choice to have my meditative practice baptized - and to have it continue to unfold into a focus on 'mercy' - the to and flow of grace in which we all are gifted. Golding considered himself a universal pessimist and a cosmic optimist - poised perhaps between sin and grace. It, also, gave spur simply to my attentiveness, no bad thing in itself.