Three visions of living in freedom. 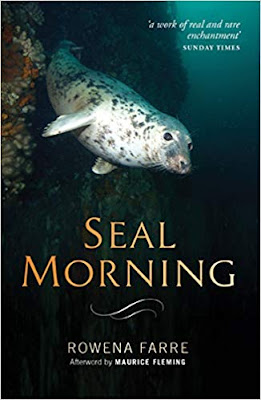 Rowena Farre (in fact Daphne Lois Macready) is an enigma. The author of three highly accomplished books that whilst purporting to be autobiography contain a certain level of fictionalization! Everything has the resonance of truth, well-told yet putting the three books and what little is known of her life together establishes a pattern of inconsistencies that set up a now probably irresolvable puzzle!

Her first book, 'Seal Morning', is an account of her childhood, growing up in Sutherland, Scotland, on a remote croft. A croft acquired by an aunt on retiring from school teaching and shared with a menagerie of animals including a common seal (Lora), a rat (Rodney), two otters (Hansel and Gretel) and a dog (Ben) amongst other animals.

It is wholly and pervasively charming - and pure escapism as its initial reviewers noted. Not escapism that overly sentimentalized the life but offered a refreshing counterpoint of resilience, connectedness, and freedom that any urban dweller might gaze on wistfully. This, as well as the quality of the writing, accounted for the book's early success running through five reprints in its first year.

We are taken through the seasons, the practicalities of life, the individual characteristics of the animals and the joys and challenges of living with them and introduced to some of Farre's neighbors and friends, sparsely scattered in this wilderness. As with all Farre's books, there is interest too in folklore and local culture especially when it borders the supernatural. Here she weaves tales of water horses luring people to their deaths, magical relationships of seal and human; and, the second sight to good account, leavening her (and her aunt's) exemplary groundedness and practicality to good and lively effect.

The principal inconsistency of the book is she claims that she lived here continuously for seven years, from age of ten to seventeen, whilst her father was in India. Yet it is clear from other sources that she indeed went to boarding school (as would be expected of a girl of her background and class). I can only presume that as with her book on traveling with Gypsies and Travellers https://ncolloff.blogspot.com/2018/07/on-hopes-realities-and-shadows-of-being.html her literary device is here one of extending the time, as she contracted it in the other book, whilst eliminating the schooling part of her life, from which she presumably went back and forth, probably because, given her reclusive and unconventional nature, it was too public, hidebound and irksome to mention!

All told the three books https://ncolloff.blogspot.com/2018/12/the-beckoning-land-that-is-within.html are a significant accomplishment, a string of minor classics, that evoke three separate but over-lapping worlds and that are important not for what they tell us of the author but what she has observed and seen of worlds apart from the ordinary and that betoken an independence - both spiritual and material - that invite us to (re)consider what we imagine to be freedom in a life well lived. The frugality, companionship, and community of a Scottish life; the roving freedom and solidarity of a Gypsy life; and, the solitude and searching depth of an eremitic life. Three visions as a counterpoint to our settled worlds.