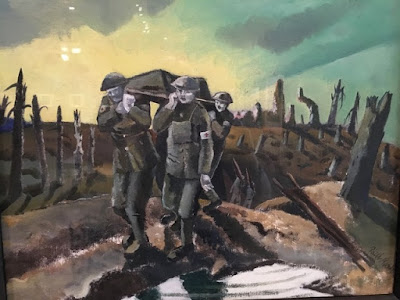 It was not a universal view that the First World War came as a strange relief but it was a widespread one. A relief partly because it seemed increasingly inevitable (even though its actual breakout can be read as a casual sequence of blunderings) and partly because the world seemed stalled, stifled in its 'Victorian' mores, trapped by its complacent empires, bursting with nationalities denied a home of their own; and, gripped in a struggle between capital and labor.

The war came and the poets mostly exalted - even measured, non-martial ones like Rilke seemed to lose their heads in the gathered enthusiasm of a war that would be a cleansing fire and usher in a new age, a reconfigured politics, new countries and interconnections between countries and gleaming with the technology and speed in which the Futurists positively exalted.

After, however, the terrible love of war crashed against the numbing reality of conflict matters changed generating complex responses. Some remained remarkably resilient in exaltation - the extraordinary, proto-Fascist Italian poet, D'Annunzio being the most obvious, others slipped into the hopes of what the war might eventually bring to their particular people - new freedom in Latvia or Poland or Croatia, others found refuge in a renewed sense of internationalism fuelled anew by the revolution in Russia; and, others witnessed to its sheer barbarity and its apparent pointlessness. This last a picture we are familiar with, for example, in the poems of Wilfred Owen (or, as above, in the images of Paul Nash).

All these dimensions (and more) are explored in Geert Buelens' "Everything to Nothing: The poetry of the Great War, the Revolution and the transformation of Europe". It is an unusual study for its breadth of scope not only encompassing the very complex range of poetic responses and its geographic, comparative European scope.

It reminds us that the poetry being written mattered. Here were societies that were drenched in poetic utterance, it was a core component of educational practice, it ranged from the personal to the political, its words mattered in helping frame events and how they were seen (and acted upon). It sold in mind-boggling quantity and was transformed into speech and song so that even the illiterate were touched by it.

What most resonated is how certain patterns remain deeply relevant - the most apparent being the tension between internationalism - a hoped for common European identity - and national homes, the specificity of place; and, those between competing nationalisms - those inclusive, open, receptive to external influence and those protective, closed, hostile to the other.

Resonant too is the continuing attraction of violence - not in its particular complexity and physicality - but as a cleansing solution. It appears we carry a deep forgetfulness - the last conflict to end all (or our) conflict did not work according to plan but this does not free us from the fantasy that it might - just the right energy applied with sufficient inspiration and a new age will dawn!

What might have changed now is the public resonance of poetry - maybe it is presently not the spoken, rhythmic word that carries that charge but the image (often accompanied by word) - the video or picture shared on social media and (maybe) its accompanying story. But even if this is so, what has not changed is the multiplicity of view and the ability of emotion (and ideology) to shape what is heard (or seen).

Then was a time of conflicting story trying to create a truth of things, now is no different, we are victors and victims of our stories so if we want to create a better, more harmonious world, we need to sharpen our skills and winningly seduce the world into our vision of things for 'facts' on their own (if they ever do hang out like that) will never bring us where we want to be.