A stain on the blood, an opportunity missed. 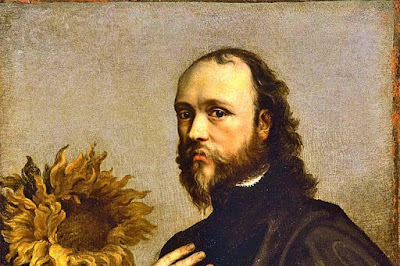 Sir Kenelm Digby (pictured) was dealt a rough opening hand. His father, Everard, more from friendly commitment than conviction, found himself embroiled in the Gunpowder Plot. He was tried, convicted and hung, drawn and quartered. This was an especially gruesome form of death. When it was described to me, as a child, by my English teacher, it led at least one classmate to actually faint!

Kenelm grew up, a recusant Catholic, motivated, so Joe Moshenska argues, to make for himself a life so splendid that the stain would be removed. How he did so is the subject of Moshenska's "A Stain on the Blood: The Remarkable Voyage of Sir Kenelm Digby".

It is a well written account that introduces you to a lost figure of seventeenth century English history who, as a person, is admirable. A myriad minded man he was scholarly, adventurous, an accomplished diplomat and, helpfully, for story telling, had a deeply passionate engagement with Venetia, the woman who became his wife; and, whom he deeply mourned on her early death. A death immortalised by Sir Anthony van Dyck, one of Digby's friends.

Digby was a genuinely transitional figure. A man as deeply interested in alchemy and astrology and a member of the newly founded Royal Society. A passionate Royalist and friend of Charles I and a man who found himself, on his voyage, questioning difference and tentatively considering the equality of men. A Catholic and a man who probed the viability, truthfulness of other traditions.

The problem with the book is, however, twofold.

First it tends to "over claim". Though he is undoubtedly worthwhile recovering, equally his disappearance is wholly fathomable. Even though he was compared to Descartes, so myriad minded was he, it is clear that none of his individual contributions to scholarship lasted. Indeed the book is strangely muted on what, in fact, Digby actually did think about the critical ideas of his time.

Nor was his voyage, though undoubtedly a success for him, especially remarkable historically. Yes, he was the first English sailor to directly release captives, among his countrymen, from slavery in Algiers (through the force of personality and good diplomacy alone). He collected a lot of manuscripts that enhanced the collections of Oxford but none were groundbreaking discoveries. He made a lot of money as a successful privateer and from buying wholesale antiquities from Greece. He helped reform the Royal Navy. But the sum of the parts does not appear to make up a compelling whole.

Second because it misses a 'trick'. Digby was a transitional figure between worlds and wrote voluminously and reflectively about them. Might we not learn something more about what that looked like: the magical and the new sense of the 'rational' jostling side by side and in cognitive dissonance?

We get a glimpse of this when Moshenska discusses Digby's development of a recipe for a 'sympathetic powder' by which by treating the harming instrument, a friend so harmed by the very same sword was apparently cured. Since this is "impossible'' (by current standards), it is described, though sympathetically, as belonging to the realm of the fabulous (or superstitious). But it was not so for Digby, it was simply an unusual but real element of science, waiting upon explanation (or refutation). What might it look like to inhabit this world? A world that, in many ways, feels more exploratory, and wonder filled, than our own. Likewise Digby is described, too briefly, utilizing alchemy to approach his wife's death, to explore the essence of soul. So briefly is it described as to sound intriguingly weird but what it meant for Digby (and how it was meant to 'work') is left unexamined.

Thus we are left with a rather one dimensional picture of Digby - the person pursuing his family's lost name in successful adventure - but not as a scholar, thinker, a man from a very different age of thought but one that birthed our own. This was a man, for example, who accompanied virtually his whole life by casting his own horoscope - now what did that mean for his biography (and in that he was no way unusual to his century)? We are not told. Sadly, it appears to follow too closely the failure of much contemporary biography of staying on the psychological surfaces and being fundamentally uninterested in the visions and ideas that make (some people at least) really tick. A recovery of that might have made for a truly fabulous journey in the history of lived ideas.