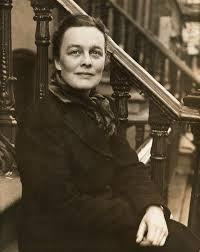 When I was at school, a friend encouraged me to read both the poems and the (three volumes) of autobiography of the poet and Blake scholar, Kathleen Raine. By one of those happenings of synchronicity, I had come to her work simultaneously whilst looking, in my local library, for someone who could help me understand Blake - the poet I was reading so compulsively, haunted yet with little conscious understanding. I had found her collection of essays, 'Blake and the New Age' and had devoured them as they illuminated a landscape from which I have never since retreated.

When subsequently I saw, as a student, a copy of Temenos (its second edition), a journal she edited on arts and the imagination, I struck up a four year correspondence that culminated with our first meeting.

This was at the first Temenos Conference at Dartington Hall in 1986. I remember standing close by whilst she carried out a conversation with another participant, hovering uncertain as to what to say as an introverted, nervous twenty three year old. She span round and that rich, sonorous voice of her's declared, "And you must be Nicholas! I am carrying your last letter to me around in my handbag as a talisman"! I cannot recall my startled response but it confirmed a friendship that was one of my life's great blessings. She turned a beam of light upon me and I unfurled. I remember how at that conference, and the second, she would come up to me at random moments and ask, "And how Nicholas do you think our conference is going?" as if I were her most intimate collaborator! This I was not but her generosity (that I can only confess not everyone saw or was treated to) was life giving and deeply confirming.

I was reminded of this reading the recently published selection of her essays, 'The Wondrous Pattern: Essays on Poetry and Poets' edited by Brian Keeble, one of her fellow editors on Temenos. Many of these I have in other forms but it is wonderful to have them gathered here and newly available to future readers.

Reading them I was struck by the searing intelligence, clarity and profoundly counter cultural nature. For Kathleen was a thoroughgoing neo-Platonist convinced that the fundamental nature of the world is mind and that the best path to knowledge is the exercise of the Imagination. This tradition (for such it is) represents an excluded pattern of learning and wisdom to which the most significant English poets had access and of which they were exemplars (to a greater or lesser degree). Top of her tree of wise greatness were undoubtedly Blake, Shelley and Yeats on which she writes perceptively and through which she engages in a critique of ways of seeing that are constrained by a reductionist materialism. Here too, however, are Keats and Wordsworth, Manley Hopkins and Eliot, Edwin Muir and Vernon Watkins. All defenders of the world as a sacred place, a temenos, where beauty abounds and seen aright is a mirroring of a transcendent order.

The essays, however, not only lay out an intellectual position (and criticism), they also resonate with reflections on the poet's art. How do you wait upon inspiration, how do you work with it, how does one wield symbolism into a coherent whole that resonates with a truth that lies beyond speech (and for which number and music might be purer counterpoints)?

Each poet emerges through her seeing a renewably valuable and more clearly seen. For example, her treatment of Keats is masterly. It is often suggested that he was cut off in his prime, only getting started, before tuberculosis intervened. What might he not have written had he survived? This is a legitimate speculation but it detracts from Keats' achievement as a shaper of what he described as 'the chamber of maiden thought' of the innocence of youth and its particular shaping of insight and knowing, the clarity of its perceptions as it treats the world out of its idealism. A view of the world too often obscured in latter struggles; and, a view of the world that ought to be held up as a continuous counterweight to our too easily succumbing to 'experience'. For as St Benedict says God often puts truth into the youngest member of a community (his reference here being to a monastery) and we should always allow them space to speak. Keats work is a continual remembering of these innocent paths of seeing, a renewing freshness.

The essays, also, like all fine criticism return you to the sources - to rereading or reading anew the poets treated thereof - and of those she treats the most sorely neglected is the Welsh poet, Vernon Watkins, friend of Dylan Thomas, and by Thomas' own admission, the better poet. Kathleen shows both why this is so and why he is so neglected. His work is so musical, so precise in its lyrical yet symbolic forms, that very few readers - even if they recognise the music - can easily arrive at the meaning yet the meanings are precise drawing on a depth of symbolic knowledge that is profound. It is as if we all lost a particular power of speech (and listening) that closes to us worlds, upon worlds. Herewith to close one of Watkins' most beautiful poems capturing the heron as both bird and ancient symbol of contemplation.


The cloud-backed heron will not move:
He stares into the stream.
He stands unfaltering while the gulls
And oyster-catchers scream.
He does not hear, he cannot see
The great white horses of the sea,
But fixes eyes on stillness
Below their flying team.

How long will he remain, how long
Have the grey woods been green?
The sky and the reflected sky,
Their glass he has not seen,
But silent as a speck of sand
Interpreting the sea and land,
His fall pulls down the fabric
Of all that windy scene.

Sailing with clouds and woods behind,
Pausing in leisured flight,
He stepped, alighting on a stone,
Dropped from the stars of night.
He stood there unconcerned with day,
Deaf to the tumult of the bay,
Watching a stone in water,
A fish's hidden light.

Sharp rocks drive back the breaking waves,
Confusing sea with air.
Bundles of spray blown mountain-high
Have left the shingle bare.
A shipwrecked anchor wedged by rocks,
Loosed by the thundering equinox,
Divides the herded waters,
The stallion and his mare.

Yet no distraction breaks the watch
Of that time-killing bird.
He stands unmoving on the stone;
Since dawn he has not stirred.
Calamity about him cries,
But he has fixed his golden eyes
On water's crooked tablet,
On light's reflected word.
By Vernon Watkins