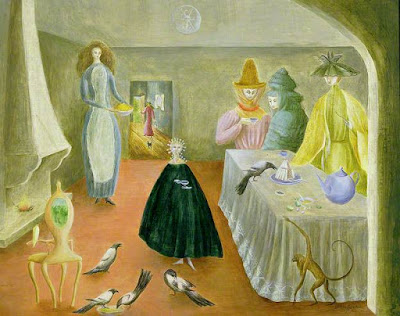 The Old Maids by Leonora Carrington

A prophet is not without honour save in their own country.

Leonora Carrington as an artist has a journey to go before she is recognised as one of the most significant English artists of the twentieth century. She is significantly resonant not least because she resolutely, as any English eccentric ought, was a determined follower of her own path.

This course is admirably described in Joanna Morehead's 'The Surreal Life of Leonora Carrington'. Morehead had an advantage in coming to know the artist in the final years of her life (though that advantage was not immediately apparent) for being Leonora's cousin. It was not apparent as advantage because Leonora had resolutely walked out on her parents' expectations in 1937 when defiantly going to live with Max Ernst in Paris. Ernst's artistic status were of no interest to her parents more important was that he was a foreigner, poor and married. These were characteristics that counted a great deal more to Leonora's very wealthy, conventional parents; and, the complex estrangement that virtually disappeared Leonora from family view had kept Leonora hidden from Morehead until very late in the artist's life.

But, thankfully, not too late for the last few years' of Leonora's life, Morehead could visit her in her Mexico City home, become friends, and over what appears to be endless cups of tea, help Leonora connect with her past in renewing ways. From these conversations, supplemented by the necessary research, this sensitive book emerged.

Leonora was always and everywhere herself- resilient to a fault - who voyaged far both inwardly into the halls of madness and spirit and outwardly from English Upper Middle Class wealth to a feted, if always deeply private, position as an adopted daughter of Mexico.

She was a continuous crosser of boundaries - in search of freedom and in pursuit of always better questions to the mysteries of life that surround us. The freedom was intimately bound with her position as a female artist, fiercely defended and wholly real.

The value of the book, as well as evoking the life, is to show ways in which that life informed the subjects of her art - both painting and writing. You see anew the significance of recurrent themes in her art -  for example of her family's Irish and Catholic background, of the importance of horses as symbols of potential freedom and of the 'crone' (a word she loved) the symbol of an ancient inexhaustible feminine wisdom.

If there are faults I suppose they are twofold.

The first is that the biography leans towards memoir - the full apparatus of biography is missing.

The second is the depth of intellectual background that too must lead us beyond memoir.

Carrington was resolutely opposed to interpreting her art- what mattered was the felt responses of the viewer. This is a wholly legitimate view yet at the same time Carrington describes herself as a 'carrier' or 'conduit' through which meaningful art flows. Thus it behoves us to ask what shaped the conduit and, as Morehead notes, Carrington was, in fact, highly intellectual and liked nothing more than a resonant philosophical discussion. Here we only get tantalising glimpses - the importance of Jung and Gurdjieff and of Robert Graves' 'The White Goddess' described as the most important book the artist had read but quite why and how that becomes reflected in her art is left danglingly open.

Nevertheless this is a moving and finely written testimony to both a fabulous artist and a remarkable woman. A person who lived their life to the uttermost and who, as Morehead notes, is admirable not least because, though often afraid, never allowed it to determine their actions and a person for whom the last word was always allowed to wonder.