An old yet timely biography of Jung 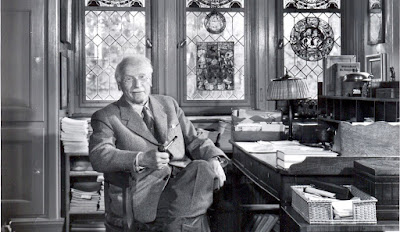 I was walking up the stairs in a tower (presumably Bollingen built by Jung as a retreat) and reached a landing. Opposite me was a door, I knocked, stepped in, and found the man himself, Jung, in bed. I thought of it as his 'death bed' and the room was suffused with the light of a descending sun. He looked at me, direct, friendly if piercing eyes, and asked me, 'Do you know yoga?' "Yes,' I replied, 'I know of it'!

One of my two dreams about Jung (both curiously set in his bedroom) and this one straightforwardly illuminating getting you to ponder the gap between knowing as embodied understanding and knowing of as simply intellectual currency.

It was the bridging of that gap - of prioritising the empirical and emergent over the dogmatic and logically structured - that was Jung's life's work. Always reminding his audience that he was a healer first, a theoretician of consciousness second. Always bringing the crucial encounter back to the individual's need to own and change their own lives, co-operating with the unconscious, towards a more complete, whole human being.

Though following the trials of this experience can lead you into esoteric directions as I was reminded reading Gerhard Wehr's biographical study of Jung.

I was struck by how this treatment of the man's life was significantly different from previous accounts I had read and suddenly realised that the differentiating factor was that the former have so often been accounts framed from an Anglo-American point of view/cultural bias. Wehr is so much more comfortable with the speculative Jung. He is not always looking over his shoulder (as Jung himself sometimes was) at Jung's scientific reputation (if that is positioned, as it still is, within a materialist, essentially nineteenth century framing) and allows all his dimensions to speak for themselves. Wehr refers to those critics who accused Jung of 'obscurantism' and 'mysticism' but rather than defend him allows Jung to be seen as comparable precisely because of the depths of human experience with which Jung felt charged to wrestle and illuminate. His methods might be differentiated from that of the mystic but they were avowedly at work on the same territory.

Thus, does Jung emerge as a fundamentally religious thinker, not simply a thinker about religion, recognising that the wholeness after which religion strives - the 'yoga' of unification - is the key to healing and well-being to which, known or unknown, all human life tends as its fundamental direction. That any particular religion is incomplete, itself in need of evolving and thus open to critique is for Jung a given so he is an uncomfortable thinker for both the 'atheist' and 'the religious'.

What strikes you most about his life is that it danced always into the unknown and the uncertain but it always danced! You create form from the given context weaving into a life fully lived.

Wehr is a less certain companion, however, in the field of the personal. Wehr's comfort is in the ideas and their context as they live in Jung's engagement but you miss, especially in the second half of life, a sufficiently rounded account of his actual therapeutic practice - what did he actually do in all those cumulated hours with patients (and who were they). You miss too a serious wrestling with the costliness and fruitfulness of Jung's extraordinary relationships with women - first with his wife, next (and in tandem) with Toni Wolff  - and others too. You hear about them, they are acknowledged, but never coloured with sufficient depth.

Meanwhile, though this an 'old' biography, it does put to rest the repeated and apparently never to be defeated charge of anti-semitism. That he made an error of judgement in seeking to keep afloat organised bodies of psychotherapy in Germany after Hitler came to power is clear. That he made distinctions between Jewish and Aryan psychology at a time that, whatever their purport to himself, could only be misconstrued in the fevered times is also true (but then so did Freud) and indeed the temptations to inept 'cultural' psychology are still with us. But none of this reveals any evidence towards a cultivated (or indeed unconscious) prejudice - and his behaviours towards specific Jewish colleagues and friends were exemplary (and his detestation of Nazism indeed dictatorship in general complete).

Indeed, stripped of their momentary misconstructions, his insights into the attractiveness of power and the fundamentally empty personality that, paradoxically, can be an extraordinarily powerful vessel for its manipulation are only too prescient. He reminds us of the sheer relief we find in handing over our selves to others who will make 'it' (the larger unit with which we identify) great again and in doing so absolve us of trying too hard to become great in our selves which can, ultimately, be the only guarantee of any equitable order. Jung's cultural critique is, thus, as needed as now as ever - as our neglected shadows rise to prominence once more looking upon whom they might fall (rather than be owned by their projectors).