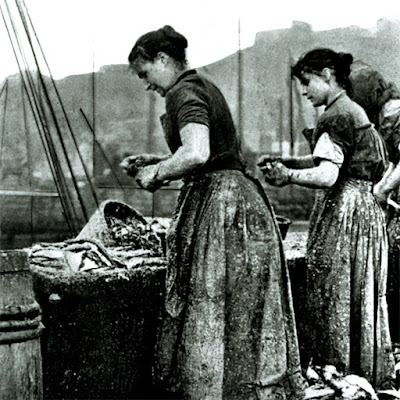 A boy grows to manhood sealed in ownership of his own fishing boat and prospective marriage. His mother rediscovers happiness as she nurtures him, becomes reconciled to a tragic past and finally marries again. And lots of fish, mostly herring, and fishing on an unpredictable sea.


From these apparently simple elements, Neil Gunn, wove his masterpiece that is, 'The Silver Darlings', published first in 1941. Set in the merging herring fisheries of the 1820s, it not only follows the trajectory of its principal characters over a twenty year period but demarcates the refashioning of a community around the sea.


Driven by the clearances from their inland glens, communities found themselves either emigrating or on marginal land forced to take up a new life. The novel starts with Tormand's first fishing expedition in his own, new boat that ends in tragedy when it is accosted by a press gang ship and its crew hijacked for imperial service on the high seas. Tormand resists and in the resulting melee is injured later dying from his injuries. His wife, Catrine, back on land, is not to have this fate confirmed for many years and it is this that shapes her life and the life of her new born child, Finn. Her binding to Finn becomes a suffocating one that must be broken if it is ever to be renewed on a new basis. This drives the narrative, combined with Catrine's long suiting by Roddie, a newly emergent successful herring fisher and stimulus and rival to Finn's longings. This tale of binding and unbinding, of admiration and jealously, of shifting emotional scales, often in a twinkling of time, is beautifully told, never putting a psychological foot wrong.


But this being Gunn not everything flows along this well drawn, evocative path of social realism. Catrine knows that Tormand is dead (though cannot act on her knowledge until outwardly confirmed) because at the moment of his death, he appeared to her, unmistakably gesturing his new state. Finn has an abiding vision of elderly man, beckoning him forward towards a better image of himself, that he sees as a young boy at the ruined 'House of Peace' (probably once a simple monastery) a calming, challenging image he carries through life. And so it goes.


This is a world not only wholly real in the complexities of the hope and injustice of history, both communally and individually, but a world saturated in the psychic - of intuition, dream, ritual and superstition that may continually be more than that; and, ultimately it is hinted, if not said, of a unifying transcendence. A transcendence that culturally is invested in the abiding, and ever present Christian faith, however disfiguring of that faith certain presented theologies (or ideologies) may be; but, for Gunn, more deeply in a common unification of mind and way that could be best be described as 'the Tao' (a recognition Gunn himself came to in later years). The world is the expression of a unifying way, beyond description, that we recognize at critical moments when our seeing is clear and we consciously merge with its flowing and being (and from which comes the intuition of our best Self).


Meanwhile, there are fish and the sea! What makes Gunn a great writer is his ability to weave all these elements together - communal life, individual narrative, deeper meanings - with an epic story of a community's coming to be - and with great set pieces - the opening press ganging, a cholera epidemic, the fight in a pub, the tension of a sustained period of fishing failure, a storm tossed trip to the Outer Hebrides; and, Finn's epic scaling of cliffs to effect a rescue (of different kinds) not once but twice. A continual sustaining of interest over its 584 pages (and, like Moby Dick, a lot of information about fish and fishing).


Finally, and tangentially, there is the image of a community faced with apparent inexhaustible abundance without recognition that this was not true (though one conversation hints at the first signs of insecurity). It was a more innocent age than ours - though even as we know fishing stocks are in collapse - it barely yet touches our behaviors - the story of inexhaustible material abundance remains with us yet.