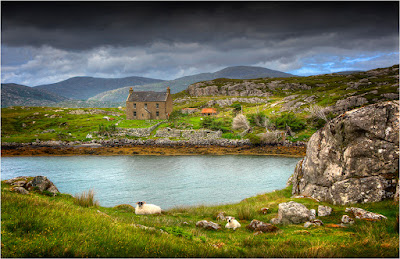 Not content with reading one book on walking and its effects (on heart as well as body), I followed reading Robert Macfarlane's 'The Old Ways' http://ncolloff.blogspot.ch/2016/07/the-old-ways.html with Alastair McIntosh's 'Poacher's Pilgrimage: An Island Journey'.

They have a family resemblance not least because two of Macfarlane's journeys - one on land and one on sea - have as their context or departure point the Outer Hebrides and Alastair's journey is from the southernmost point of the Isle of Harris to the northernmost tip of the Isle of Lewis. In these journeys, they share overlapping cultural references, both past and present, and indeed the living participation of more than one actual person. Macfarlane, however, by way of difference, is an occasional visitor, Alastair is crossing the territory of his upbringing, where his elderly mother still lives, and every and any person chanced upon might reveal an acquaintance or connection.

They share too an interesting but contrasting disposition towards, for want of a better word, the 'supernatural'. This is not only because one of the themes of Alastair's rumination as he walks are the relationships between religion, culture and violence (a field in which he is an expert) but more literally where do you park (within your mental furniture storage) ghosts (or faeries) (or the second sight).

Macfarlane goes (on one of his journeys) to sleep at the Chanctonbury Ring (in Sussex) only to be disturbed (to put it mildly) by a sustained, circumnavigating shrieking to which he can allot no obvious cause. It is a disturbance that, he discovers later, is a common one encountered by those who try to spend the night there. Having been there only in daylight and dusk, I confess it would never occur to me to want to sleep there! Interestingly, in his preface, he alludes to several moments in his journeyings (such as this) when happenings eluded his ability to explain though he goes on (in the same preface) to ascribe this incident to owls rather than ghosts (ironic for two reasons - first because he considers and rejects this interpretation at the time and secondly because owls in folklore are liminal creatures associated with the world beyond, with death)!

Alastair, however, sits with a range of possibilities for the oft reported encounters (in the Hebrides) with another world (and many of the stories told are fabulous and yet related with an earthly matter of factness). It might be objectively true. It might suggest possibilities that have yet to be accounted for by our prevailing world view (not one, in its prevailing materialism, given to entertaining the anomalous) being beyond the normal (rather than strictly supernatural). It might reveal the structures of our meaningful yet inter-subjective inner interpretation - the imaginal in the words of Henri Corbin or the collective unconscious of Jung - our necessary ability to weave myth to capture meaning beyond the simply explicable. It may be all three  - an underlying substrata being differently interpreted through valid, if constricting, cultural and psychological lenses.

Reading the two books together, you wished Macfarlane had stayed with his original experience rather than defaulted to the 'rational' (that in this case, as so often, does not mean the reasonable, the ordered patterning of thought but whatever our current set of societal assumptions says can be 'true'. If this is rational much progress in thought has thankfully eschewed the rational).

Amongst other things, it is humble and humorous account of a person traversing his own history against the background of the history of a place. It is an accounting of the way in which culture is informed by its places and informs those places. It reminds us that our ecology is inescapably a human one so the stories we tell are critical if our lives are to be harmonising or conflictual, with one another as much as with our places. It explores the consequences of religious ideas, good, bad, indifferent and ugly, on our social and ecological lives, most notably, as mentioned before, on the subject of our propensity for violence and the possibilities of peace. It paints affectionate vignettes of people, animals and places met and remembered, not least portraits of soldiers who Alastair encounters in his lecturing who find themselves addressed by the complexities of violence. It reminds us that, as a Belarusian friend said on our recent holiday to the west coast of Scotland, you do not have to move for the landscape to be constantly changing. It reminds you that the elements so often decide what you see and impinge greatly on what you feel, moment to moment!

It is a lovely, accomplished and thought provoking book.