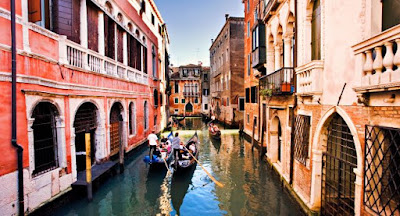 This is a 'late' novel by Rumer Godden featuring, as so often, a young person's awakening to adulthood in this case a young ballerina on her first tour abroad, a tour that brings an upcoming ballet company from middle England to Venice.

Pippa is highly talented but only seventeen and in the corps de ballet when she arrives. When she leaves, she will have debuted as a principal and be on the verge of her first solo part (to be danced in Milan). She will have lost her virginity, discovered and rejected a parallel career as a singer, been awoken to the complexities of love, been befriended by an elderly aristocratic couple and fallen in love with an 'impossible' man in which the only future will be in the 'eternity' of memory and with the city (and, subtly, too with the Madonna).

All in a swift, light, beautifully observed and psychologically acute 171 pages...

This is not, by any mark, her best novel (for which it probably needs some sharper shadows and touches of darkness) but it continues to exemplify why I so admire her.

For the accuracy of her observations - how a single additional word, for example, reveals a whole new dimension in one person's seeing of another.  For the naturalism of her plotting - all of which unfold with a coherence that requires no improbability. For the glints of faith that are woven throughout and which rest wholly embedded in the foregoing naturalism - the Marchese takes Pippa to the first communion of one of her godchildren, something about the repeating presence of the Madonna, depicted differently but lovingly throughout the city, draws Pippa's attention and just that level of attention you would expect from a curious young woman, alive to making meaning from the complex changes unfolding within, and yet no more.

Nothing is forced, everything emergent from a gifted yet grounded imagination. In Godden, there is no experiment, nothing 'visionary', her's is the gift of craft, something continually accessible and exceptionally well made.