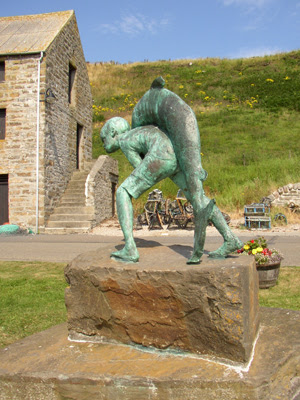 'The Great Shadow House: Essays on the Metaphysical Tradition in Scottish Literature' is more easily, and delightfully, digestible than its title. The novelist, biographer and critic, J.B. Pick, deftly surveys from the Carmina Gadelica's nineteenth century recreation of folk tradition through to the twentieth century novels of Neil M. Gunn how certain, primarily prose writers, have wrestled with intimations of 'another world', present and accessible to this one, that gives to our ordinary, habitual world, depth, light and a renewing harmony.

In seeking this world, and to talk of it truthfully, since the sixteenth century, Scottish writers have had to navigate through the omnipresent atmosphere of Calvinism that most have seen as inimical to vision and indeed imagination. If the world is mired, bound in 'sin', alienated from God and God is an arbitrary judge allotting election on whom He may for reasons unfathomable to human reasoning (or imagination) meanwhile damning the rest, there is little apparent room for perceiving the natural order as breaking open to a redeeming, lightening, indeed transfiguring reality. The world is here to be endured, worked in responsibly, and escaped from with the ever present anxiety of what comes next. This may be a caricature of Calvinism (and even at its height of influence it was, and can be, only one source of the multiple identities people inhabit, often with much cognitive dissonance between them), even so caricatures often have more life in them than the realities (or intentions) from which they were formed.

Pick always keeps this background in mind as he explores authors as diverse as George MacDonald and John Buchan and he notes that one emergent pattern is that a hatred of a tradition does not necessarily result in a counter balancing otherness of view but a mirroring. I come to despise the narrow life of communities, being inevitably human hypocritically bound to the narrow moral perfectionism of the kirk, by an equally narrowing act of despising in which people remain bound to nothing but their all too human hypocrisies!


Pick's best essays, however, concern authors where this background though present has fallen away either by dint of an overpowering countervailing vision or a mature act of balanced transformation. In the former case is David Lindsay, in the latter Neil M Gunn. Both are authors who ought to be better known - the first simply better known, the latter outside his native Scotland.

If I were ever asked to give a course on Gnosticism, Lindsay's 'A Voyage to Arcturus' would be my first set text. This is not because, as far as I know, Lindsay was ever influenced by Gnosticism as such, but because it is a brilliant vision of what it means to imagine that this world is ultimately a delusion, an imprisoning one, and that a person's true life is to be found embracing a reality beyond it; and, that getting there is a hard, spiritual struggle, that is only achieved through the acquiring of a certain kind of knowledge, peeling through layer on layer of deception.

Pick is absolutely right to say that if you read this extraordinary book trying to decipher it symbol by symbol or stage of consciousness after stage of consciousness, you will fail. It is a vision to be experienced whole, wondered in, and only then reflected upon. When Lindsay himself tries to explain himself, he becomes uncertain and his prose stodgy. The tragedy of his life is that none of his subsequent novels try as they might to accommodate his overbearing vision to a more familiar (and hoped for popular) perspective (and embodiment in this world) were any more 'successful' with a public than Arcturus. Yet it is a great piece of genuinely metaphysical literature - anyone, who even momentarily, found themselves wondering, 'Do I belong here?' ought to read it and ponder.

Meanwhile, Gunn was happily convinced that we both belong here, are obligated to here, and yet are invited to see here not only with the eye of ordinary perception, from our every day self, but with our seeing rinsed and cleansed, from a 'second self' that stands within us yet outside time, a detached yet compassionate observer, enabling us to 'remember our selves' and see with the eye of an objectifying love. This self, often glisteningly apparent in childhood, tends to get buried by the rational, calculating daily self that too, paradoxically, is swayed by emotions, hither and thither. Gunn was fascinated by this other self and how it might be cultivated. It was a self discovery subsequently confirmed by readings in Gurdjieff and Zen.

Pick makes the case that these considerations are present in all Gunn's works, though coming to the fore has he matured, and that his work can never simply be divided between 'socially realist' beginnings and 'mystical' ends. This is true, I think, not least because his concern for individual authenticity and liberation was always seen as the groundwork for any purposeful building of a genuine community. Communities are messy but they need an ultimate anchoring in people's underlying goodness, sometimes actualized and broadly acknowledged. This is a recognition for Gunn that was in the past threatened by Calvinism and then subsequently by more starkly uncomprimised versions of totalitarianism.

Gunn's novels are beautiful essays in enfolding the everyday mystical with the simply everyday.