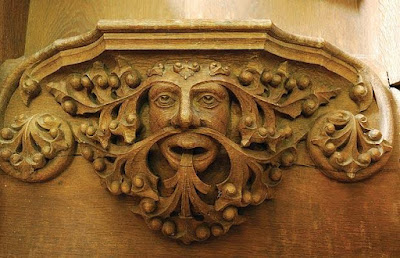 One day in Skopje searching for an apartment to rent, I passed the new(ish) Orthodox Cathedral and asked my realtor (who had a background in architecture I had discovered) what she thought of it. "Too Catholic," she replied. When I asked her what she meant she told me that it was too large and light a space, not the nurturing, womb-like embrace of a traditional Orthodox Church but something impressive only in its impersonality.

Jacob Needleman in his remarkable book, "Lost Christianity" has a similar experience. He is interviewing the remarkable and holy, Metropolitan Anthony of Sourozh, a long time Russian Orthodox bishop in London and the man who taught me how to pray. ''I have always been revolted by the Gothic," Anthony remarks, implying that in its aspirational, vaulting towards the sky, it represents not the quiet reception of grace from a present (or absent) God with whom one enjoys genuine relationship, but a restless seeking after something that is always elsewhere, implying strain and a focus on the ego not the Other.

These are two conclusions with which the writer, William Anderson, and his friend, and photographer, Clive Hicks, would take exception. In two remarkable and beautiful books, 'The Rise of the Gothic' and 'The Green Man', they perceptively and intelligently in word and image explore the extraordinary phenomena that were the eruption of the Gothic in stone, glass, and space in the Twelfth Century, beginning in central France.

For them, this was a remarkable concentration of creativity that gave new form to the archetypal potentials of human consciousness establishing a new dispensation for humanity's relationship to the created world, our own self-identity, and reconciliation with Europe's 'pagan' past. God's incarnation in Christ could now be truly celebrated, not as a descent into something mired in evil but as a descent into a reality open to the full possibility of a fulfilling redemption that recognizes the creation as good. Both books are a tour de force in both coherently charting the remarkable gift to the world that is the art of the Gothic and exploring its wider implications for understanding the nature of creativity.

A Gothic cathedral was Christian Neoplatonism in stone where the light of the One unfathomed reality shaped an abiding order of a balancing beauty. What it means to create from that One through archetypal contemplation is one of the core teachings of both books.

They undoubtedly make an eloquent case for the dramatic nature of this eruption into the patterning of human consciousness. For example, new humanity, and individuality, infuses the faces of the many sculptures that now adorn cathedrals, inside and out, and the haunting figure of the Green man (see above) critically appears as a sustaining, nurturing presence at all the critical moments of Christian salvation history- Incarnation, Crucifixion, Ascension; and, Last Judgement. No longer is nature and encircling terror but a reality to be met with, engaged, steward, and transformed.

Can, however, these two perspectives be reconciled - nurturing Orthodoxy (and Romanesque) and aspirational Gothic?

The first imagines that there is a basic fault, a rupture, between eternity and time that can be healed and our distance from the truth is collapsed by an act of return to the primordial gift. We live ideally on the horizontal plane in presence.  The second imagines an evolutionary journey forward - the stage of the Gothic - the human being as a steward yet transformer of nature is an act of necessary separation that invites a stretching after a new unity - not a basic fault but a 'happy fault' that makes new structures of consciousness possible. We live ideally on the vertical plane, an ever-ascending spiral towards new possibilities.

Where you sit, betwixt these two possibilities, maybe, I suspect determined by temperament beaten on the anvil of experience; but, I think, you can see ways in which they may be harmonized.

We live betwixt our natural home - the womb-like nature of an Orthodox Church - and an aspiration to strive after its higher instantiation as an acquired yet transcendent gift - the spaciousness and coherent narrative of a Gothic cathedral. Perhaps the security of the one is a necessary precondition of successfully navigating the adventure of the other. We need to continually touch our embodying wholeness if we are to go seeking our transcendent invitation.