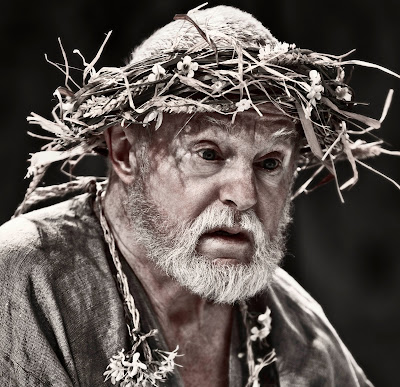 Not perhaps the most obvious way to start the year studying King Lear though in convivial surroundings, plenished with good food and wine and in excellent company.

King Lear is Shakespeare's most unremitting play - family dysfunction, graphic violence, madness, mystery and no easily redeeming end. Indeed, as I learnt, from the 1680s to the 1840s, an adaption was made, borrowing from the earlier play from which Shakespeare himself had borrowed, to restore a 'happy' ending with Cordelia alive caring for a rejuvenated, renewed Lear. It would be an exploration in reception theory itself to understand precisely why those changes happened and why we reverted to Shakespeare's original when we did.

Meanwhile, the play was examined by universally excellent speakers, in watching Olivier's performance (televised by Granada), in study groups and in informal conversation (and no doubt in ruminative walks in the greyness of Windsor Great Park)!

I was very struck by how significant Shakespeare was to many of my fellow retreatants whether springing as an early or later love and especially when people reminisced over particular performances and compared them - Olivier or McKellen, Holm or Hopkins - though nobody in my hearing mentioned Jacobi (depicted here). Thankfully others were as ignorant as I and the days worked because both innocence and experience, knowledge and the refreshing pairs of new eyes were valued.

I had seen the play precisely twice - Robert Stephens at Stratford and Peter Brook's film with Paul Scofield - (both of which the experts rated) - and read it, I think, twice, once years ago and once in preparation for the retreat.

There is nothing like spending four days with fifty people to make you realise how polyvalent are the possible meanings in a text (especially here when the author's voice and life [pace postmodern theorising] is not here to help you frame those possibilities).

This time the thing that emerged most strongly was the profound difficulties of ageing. Lear wanting to surrender all and yet not wanting it. His offer to divide his kingdom is not unconditional. It demands protestations of love, that with Cordelia's nuanced response goes awry, and even when undertaken, with the two 'remaining' sisters is not followed through in any heartfelt or indeed practical manner. You recognise in this the continuously difficult balancing act everyone must play as they age - what do I no longer need to do or be this or that and when is the apt time to let this or that go, recognising the diminishment yet also possibly a newer, unfamiliar freedom too?

You recognise too that 'cause' and 'explanation' are mismatched throughout. Why something happens as it does is never met by any obvious explanation in the text. Why, for example, King Lear does fly into such a rage when Cordelia, so beloved momentarily before, does not give Lear the answer he needs? Or why Edmund is so determined to displace his half brother, then his father, in such a calculatingly cold (and opportunistic) manner? It is as if Shakespeare is simultaneously saying (at least) two things - each and every one of us remains opaque to others (and possible to ourselves); and, second, the response to this opacity is dependent on our willingness to deepen the range of our awareness, a journey we can refuse; and, in refusing may find it thrust upon us in any case. The repressed returns (even prior to the sanction of Freud). Lear has madness break him into a renewed, if flickering, self-awareness, Edgar takes on the semblance of madness to meet a renewing obligation to his father, the Duke of Gloucester who, in turn, is literally blinded so that out of this trauma, he recovers sight. The world seems strangely determined that we should see at often an unremitting costliness.

Finally, I was reminded that Shakespeare is the most embodied of intellectuals by which I mean that none of his ideas are in search of a text. They come fully clothed in a precision of language and observation that continually invites and re-invites contemplation. They strike the depths in us repeatedly before coming to the surface; and, as they arise can take us in many fruitful directions. Most especially he is concerned to invite us to question everything, and live in the questioning, for only out of the awareness this gives rise to might we find answering responses.

Nothing except the play itself is a given.