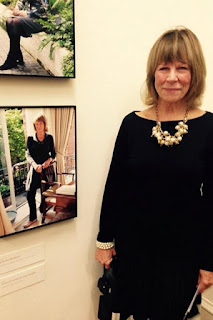 If one was to draw a Venn diagram of myself and the intersecting worlds I inhabit - myself and the world of fashion would overlap only to a small degree (though that is a change from a time when there would have been none). This would have been through disinterest rather than disdain though I do wish we could better distinguish a love of clothes, colour, expression from the apparent treadmill of 'fashion', the twice-yearly shows of new collections (but that probably reflects a more general disagreement with an 'economy' that colonizes every aspect of life and imagines constant change or 'growth' as a sign of maturity rather than of a deep lack).

But one intersection with it came through a friendship with Annette Worsley-Taylor, who very sadly and after a rapid illness, died last week. http://www.vogue.co.uk/suzy-menkes/2015/08/suzy-menkes-remembers-annette-worsley-taylor-british-fashion-council. She was a key driving force in shaping the fashion industry as an entity in the United Kingdom in the 80s and 90s, a force that the obituaries acknowledge had been underrecognized, but very real; helping many designers to be recognized and flourish, and, to which she brought steely charm, organizational gift and a discerning eye.

It was the eye that brought us together for in her last decade she began to suffer from macular degeneration a major cause of sight loss, advancing as the general age of the population rises. This led her to research the diverse challenges to vision that people face throughout their lives and the gaps in awareness and the provision of support that exist in the UK (and further afield). In response, she had an idea, as yet unrealized, to harness the creative industries, most of whom depend on sight, to raise money to support existing charities as they research, raise awareness and help people in the field of sight loss. It was to be called 'Creative Eye' and I, as a presumed expert in charity, became a trusted advisor on how such a vision might be realized.

Apart from anything else, this led to many delightful invitations to lunch and dinner, preceded or followed by earnest discussion of the proposed charity, whose basic insight I trust will be picked up one day by others and brought to realization. Sight is a surprisingly neglected area given how vital, when asked, we all feel it to be! A case of taking for granted the most familiar, until that is, it begins to leave us.

What I will most remember of Annette is her wonderful gift of being interested in you, your life, its condition and prospects, about which everything was wholly genuine and nothing feigned; and, her, and Anthony, her husband's, wonderful hospitality, as one obituary writer had, it was not always punctual, but it was always splendid - for eye, taste and intellect.