- July 27, 2014
When I was bored in the sixth form at school, I would occasionally feign an oncoming cold and go home for the afternoon. This would often coincide with double periods of physical geography (apologies to the appropriately named Mr Holland).

One of the things I used to do on these happy afternoons of granted idleness was to try and read William Blake. As T.S. Eliot advised, I was reading for language and rhythm long before I could make any sense of what I was reading!

I needed help, so off I went to my local library to see what I could find. There I saw a book by Kathleen Raine, a series of essays entitled, 'Blake and the New Age,' that appealed first because a friend had been waxing lyrical on Raine's three volumes of autobiography (that I was soon to read and wax lyrical on my part) and second for the reference to 'the New Age' that resonated with my meditating Aquarian self (though the New Age in this case was the one declared by the Swedish seer, Emanuel Swedenborg: a judgement in heaven that had initiated a 'new church' - and happily coincided with Blake's own birth date of 1757).

I read the essays with abounding enthusiasm - partly for giving me a key to open Blake and partly for their own content, giving a structure to what I naturally believed, most notably that as Berkeley argued consciousness was prior, the vessel that contained all, and that its continuity was grounded in the fact that it was the gift and reality of a unifying being, God. I was, I discovered, an 'immaterial realist' (to use the philosopher, Stephen R. L. Clarke's phrase) as I remain happily to this day.

Kathleen's masterpiece on Blake was her two volume study, 'Blake and Tradition' and, after a significant interval, I have just finished reading the first volume. These grew out of her A.W. Mellon Lectures in the Fine Arts, given in Washington in 1962 and they are a masterly exploration of Blake's indebtedness to Neo-Platonism, Boehme, alchemy and Swedenborg. It is her abiding argument that Blake was a writer immersed in a 'forgotten' tradition and that reading him against this tradition makes many of his mythological themes, once obscure, illumined and illuminating. Much of the then, and subsequent scholarship, was not equipped to evaluate this - either because it was aligned with precisely the materialist values that Blake waged war on or, more narrowly, because it did not have access to the long won familiarity with the tradition that Raine so arduously equipped herself with (reading her way through everything that we know or could intelligently surmise, Blake himself read) with both a poetic and spiritual intelligence.

However, as another close poetic reader of Blake, Czeslaw Milosz, remarked though he thought Kathleen's reading was the most intelligent he knew yet like any reading much is left outside its scope, often determined by the author's own blind spots. 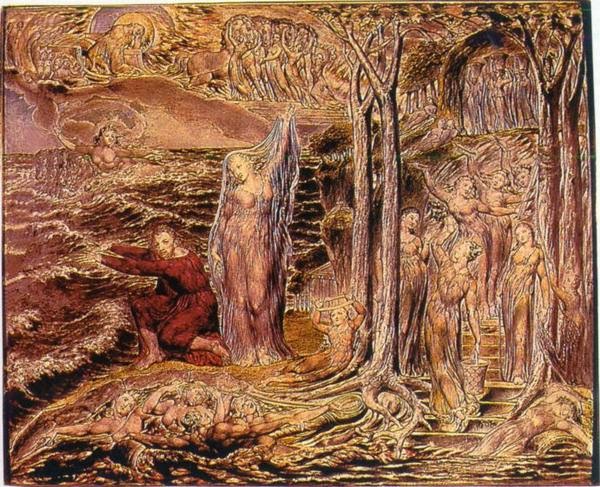 Kathleen was a Platonist with an eye firmly on eternity and its archetypes, so, for example, Blake's obvious and abiding political interests, radical and challenging, simply tend to evaporate. The fact that a poet's symbolism can work on many levels, and here does, tends to be flattened out. Time and history - even seen from the view of the politics of eternity - get short shrift!

But, more importantly, you get a sense, to which I think Milosz is eluding, that what you do with your sources, traditions, is as important as what they are, and that Blake was an original thinker, not simply a clothier of tradition in new poetic garb. You need a deeper sense of what Blake has done with his borrowings.

Here the difficulty is that Raine was writing under the auspices of a commitment to 'traditionalist' thinkers - for whom there is no originality in thought other than to deviate from the path of a legitimate religious tradition that bears witness to the 'sophia perennis' whose terms are 'fixed'. All you can do is find new ways to present these eternal realities. I am unconvinced that is what Blake imagined he was doing - for Blake 'revelation' remains an open category and Jesus the Imagination as the living principle, free and creative, who might offer something yet new in the possibilities of the Spirit's journey not yet codified by 'traditionalist' hands. It is a view Kathleen herself later came back to - the Spirit blows where it listeth and the creative unfolding of the universe is not so easily categorised.

However, the texts remain as a monument of literary scholarship and faithful fathoming and as an account of some of the ways of seeing and thought from which Blake worked an extraordinary gift.