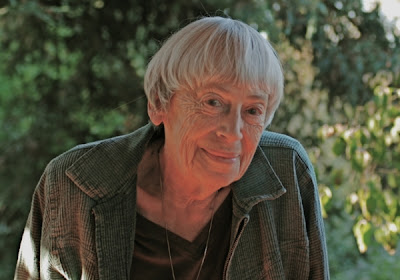 There are three good reasons why Ursula Le Guin should be awarded the Nobel Prize for Literature.

First, she writes beautifully. Her sparse, short sentences build cumulatively to develop arresting narratives of both inner space and unfolding action. They are completely accessible.

Second, her stories are stories but are suffused with running sets of intellectual challenges to consider different possibilities for human society. She is a thinker who builds representative anthropologies in which our society becomes mirrored. They too are completely accessible.

Third, it would shatter the artificial barrier between 'serious literature' and 'genre'. Le Guin writes science fiction (and fantasy), for both adults and children and is immensely popular - three traditional barriers to acclaim -  barriers which ought to be dismantled. They were not obviously present in the nineteenth century, they were built in the twentieth, they should be disassembled in the twenty first.

On winning the Nobel prize, hopefully some enterprising film maker will seek to convert one or more of her novels into films (previous attempts have been, by her own admission and my acknowledgement, lamentable); thus, deepening the uptake of her work yet further.

Imaginative literature, when it works, is offering the complexity of embodied, embedded worlds rather than 'messages' but her championing of appropriate scale (in communities, technologies and states), of diversity of peoples and possible truths, of story telling and exploration rather than imposed truths; and, of the necessity of living within the boundaries of natural necessities are all deeply appealing.

She has a quiet voiced prophetic quality that I like.