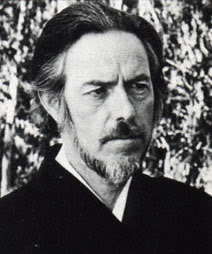 I was once offered a 'genuinely fake' Rolex in a market in Kuala Lumper and when I asked what differentiated a 'genuine fake' from a 'fake', the vendor replied, "It will work"!

My friend, Monica Furlong, wrote a biography of Alan Watts entitled 'Genuine Fake' (a title taken from a chapter in one of his many books) and it was an apt one.

Watts was a scholar who never had a sustained academic home and whose scholarship was questioned partly because he was such an inspired populariser (yet he did once enjoy a fellowship at Harvard).

He was criticised for his understanding of Zen by D.T. Suzuki and Philip Kapleau (though only the latter was a realised Zen master as it is often forgotten that D. T. Suzuki, for all his consumate scholarship and practice of Zen, was a philosopher and never a qualified teacher). But another exemplary Zen teacher, Shunryu Suzuki, described Watts, when some of his own students criticised Watts for peddling inauthentic Zen, as a 'very great Bodhisattva'!

He was ordained as an Episcopal priest (from which he faded out rather than resigned) but also drank rather too much, took drugs and was married three times!

I am re-reading his last book: "Tao: The Watercourse Way" and it is remarkably good: clear, lucid, entertaining and thoughtful and it gives you a way of looking at the key notions of philosophical Taoism that enables you to look at your own world, and your place in it, afresh. It is, also, with Al Chung-liang Huang's calligraphy, a beautiful book.

Like his older contemporary, Aldous Huxley, you have a sense of a man of high intellect and graceful imagination having seen something radically important in 'Eastern philosophy' and applying it to the needs of their age in a way that does not date, that is, on each encounter, refreshing.

Both can be criticised because they lift what they want out of complex living traditions and reinterpret it, often in radical ways. As interpreters of a tradition(s), they are fakes but as interpreters through a tradition (s) to a untied, clear vision of possibilities, they are genuine.

Watts described 'genius' as an 'intelligent questioning of the rules' - and in this case he fits his own definition. He is nothing but respectful of spiritual traditions but recognised they are there to be used as paths to enlightenment, not to be respected as rest homes (or refuges) on the way. Refuges that we often sadly come to stasis in, never actually continuing on the way.

As he famously said of Jesus, Jesus did not become the realised divine son that He was by taking Jesus Christ as His personal saviour! What interested Watts was the religion of Jesus, not the Jesus of religion.

I read him first when I was at university - which from a narrow perspective was a mistake - as he was far more interesting than the people I was meant to be reading and gave me an image of what a religious person ought to be doing: putting to proof in their own experience the realities they studied and treated of (and indeed ultimately that was the only way you could verify their truthfulness - in being so, and not other) and having fun (which I definitely was not)!

Re-reading him now is a deep pleasure re-discovered.