Eternal saints in caves, Living gods on balconies and the dead on pyres 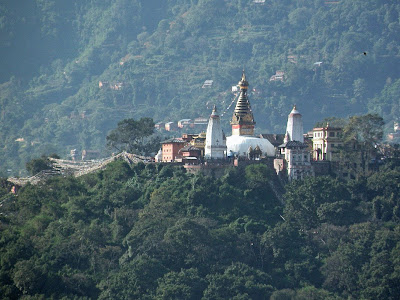 A day of being a purposeful tourist in Kathmandu.

First to Swayambhunath and a remembrance of the Shrine at Guadeloupe. Here too you stand on a hill above a city that was once a lake, the cities themselves now enshrined in, slowly improving, smog, and find a foundational shrine. Here it is to the Bodhisattva Manjushri - bearer of the sword of wisdom. Like Our Lady of Guadeloupe in Mexico, the shrine is a complex admixture of devotion, both actual and mechanical, and commerce.

It was beautiful watching an elderly woman slowly process, clockwise, around the stupa, turning each prayer wheel thoughtfully, incense sticks anointing the end of each row of wheels; and, the young girls, three in a row, being smeared with sacred paste, in their red ceremonial best, all smiles and anticipation of the mysterious ritual to come.

Manjushri is said to still live in a cave beneath the hill, meditating and radiating wisdom. In his temple is an ever-closed door that leads down to his cave and were you to pass through it, you would never return.Tempting...

All this woven and wrapped with people simply looking on, with wonder or indifference, or people praying with such swift mechanical gestures it radiated the feeling of protective routine or simply the practitioners of commerce from the prayer wheel salesmen to the felt inappropriateness of a seller of finches, bound in a tight cage and, as Blake would say, sending heaven into a rage.

Then it was down into the city to see the seventeenth century royal palace, and accompanying temples, mostly dedicated to Shiva in varied guises but with appearances from Vishnu and Ganesha and Hanuman. The latter so offering soaked that only the dimmest outline of his form could be made out from the smeared paste and hardening oil. 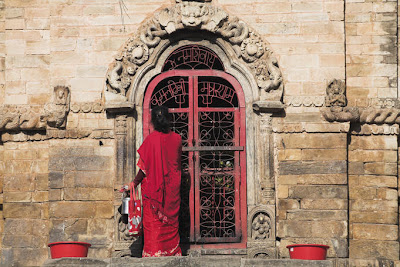 But among the god and goddesses, depicted in stone and wood, was a Living God. She lives on the upper level of a beautifully intricate seventeenth century house/temple. You pass into the courtyard, bowing low, and if you are fortunate, she will honor you with an appearance. She did. The current incarnation of the goddess Durga is seven years old, is intricately made up, and as she looked down at the audience (of mainly tourists) the only vibe she emanated was the profoundly understandable one of complete boredom. She is chosen from a particular community through an elaborate and testing ceremony and will be there until her blood flows (or she accidentally spills blood). I had a feeling she could not wait for liberation!

Finally, I went to Pashupatinath- one of the most sacred precincts in Hinduism dedicated to Lord Shiva.

Here you are confronted by death for it is here you can come to be either cremated or floated off down the sacred river Bagmati. You immediately notice that being a scared river does not protect you from physical degradation: a more unwelcoming stretch of water can barely be imagined! Several corpses were being burnt and one being prepared, wrapped in orange cloth, a naked withered head protruding, a priest in attendance liberally anointing with oil.

Once again a striking combination of ritual and theatre (with photographing onlookers) - each an enclosed world to the other. I immediately wanted to draw away (indeed shoo away the other onlookers - a Jesus in the temple moment) but also recognized how gifted it is to be a society that does not disguise death. It is both brutally present and a threshold moment and both are true. There was a woman, at one of the burning ghats, who collapsed into the brutality of it and vented her grief without inhibition, doubled with sobs, trying to beat her forehead, cared away by two male relatives to a quieter, more intimate place.

I left past the cannabis fueled sadhus - all twisted beards, white make up and yellow/orange dhotis - posing for photographs with a visitor from Singapore and chanting the country's name as if it were a celestial mantra!