Enlightenment Ain't What It's Cracked Up To Be 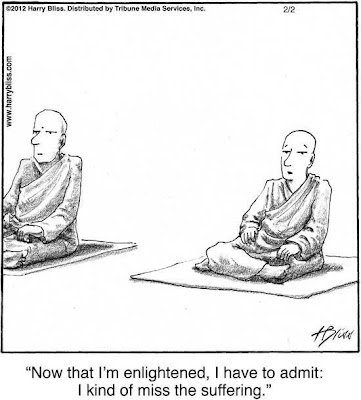 Ram Dass, former Harvard professor transformed into spiritual guide and successful author, was once slated to give a talk one evening where his host was a friend of his and mine (and who told me this story).

Ram Dass had arrived at my friend's house ahead of schedule, exhausted and dispirited, and suggested that prior to the talk they distract themselves in some way. They decided on the cinema and went to see the first Star Wars movie smuggling in pizzas to eat under their coats and sitting in the front row chomping away absorbed in the mysteries of Luke Skywalker, Darth Vader and the Force!

Arriving at the talk, Ram Dass noticed two pretty young women in the front row and said to them, 'Good evening! Glad you could come' and walked on, as he did so my friend, following, overheard one of the women excitedly, awestruck, proclaim to the other, 'Fancy, He spoke to us'!

The talk was (as befitted him) brilliant (and reflective of a genuine spiritual depth)!

Robert Forman's 'Enlightenment Ain't What It's Cracked Up To Be' is a brilliant exploration, grounded in his own life and experience, of that 'gap' between spiritual awakening and personal transformation. The former may attract the latter, creating space for it, but does not guarantee it. The structure of our consciousness: how we see and hold the world may be transformed - we live in a new spaciousness - but it does not guarantee a 'personality transplant' - that requires of us a different work, on the level of our own psyches and in relationships with one another - at home and in the workplace.

The book beautifully relates both the quality of Forman's restructured, liberated consciousness, beginning with his practice of Transcendental Meditation (and how nostalgic were his accounts of that) and how this both did and did not free him from his history, his anxieties and his personal failings. By way of example he tells of how he slowly stopped being a shoplifter, how slowly he realised how 'cramped' it made him feel, smaller, crabbier, than the person who stood in relationship to empty fullness in which he had come to rest through meditation.

Our spiritual teachers, profound as they were and are, did not encounter (or open themselves to) the complexities that are our lot; and, thus a spiritually infused life may ask for different responses from us, building on their path making but diverging from it? What if, for example, the Buddha had chosen to return to married life with Mrs Buddha: what would be the inter-action between his 'enlightenment' and their life together in its vulnerability and intimacy? What would the emergent tradition now look like if built on that foundation?

The book is searingly honest both about the nature and reality of the experiences graced to Forman and his failings (and the perceived failings of others towards him).

What emerges is a radical affirmation of the meditative quest and the change in the nature of consciousness that results - where you witness your self from a place that is empty, boundless yet full - which gently draws you on towards a life that is both more deeply non-attached and yet engaged. But also that carries a recognition that this enlightening quality does not simply deliver 'boundless joy' - you remain who you were - yet invited to the hard work of liberating that personality to dwell more effortlessly in a boundless world.

It is a story of progressive freedom not through some salvational mechanism but through becoming ever more vulnerable and open to oneself, others and the world and learning to play and improvise in that spaciousness. The image is one of jazz  - how to continually create an authentic response to reality that witnesses to the underlying freedom of all things (and their unity).

It is a beautifully wise, compassionate and unfinished book - perhaps we are never 'enlightened' but, at best, are on a way of enlightening.