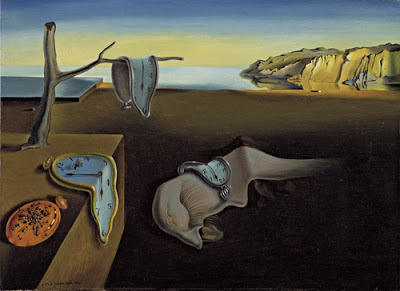 "The Surrealists were wacky but Dali was wackier" opines Olivia Weiberg in the Economist's 'Intelligent Life' magazine. It is her opening sentence in a review of a major show of Dali's work at the Pompidou Centre in Paris.

Thus is a subversive art movement packaged for the apparently intelligent readers of 'Intelligent Life'. No need to worry, dear reader, about the conventional confines of your conscious lives: nothing lives beyond them that is anything but passing strange.

Surrealism did not apparently help shape the social critique of a Luis Bunuel nor (and this ought to please the Economist at least) play a significant role in the development of modern advertising nor exert significant influence on a number of artists, many of whom were themselves never 'Surrealists'.

Nor did it liberate a number of artists into an exploration of the imagination - of a symbolic life that was a revelation from 'above' rather than an eruption from 'below'. David Gascoyne, for example, did not progress from 'surrealism' to being one of the most imaginatively gifted poets of the Twentieth century, composing his searingly beautiful metaphysical poems that place the 'world' in compassionate judgement.

What, therefore, are we to admire in Dali (beyond the titillation of the wacky)?

Weinberg  settles for a man 'who knew exactly how to use his brush': we should admire his technical virtuosity - that is, at least, a ground of safety. His paintings are, after all, neither beautiful nor admitting of great emotion and 'fiendish to untangle', according to Weinberg, (as if the unconscious was there as a puzzle to be solved rather a mystery to be lived, unfolding to laws that can only be genuinely understood if the appropriate state of consciousness is achieved).

The real challenge of Dali is why after a relatively short period of intense, subversive creativity, he slips into the repetitive, the showy and the frankly fraudulent.

It seems to me that 'surrealism' required either a way out or a way through. Certain artists used 'surrealism' to losen and then focus their existing visionary tendencies and their way out was their thorough grounding in other traditions - Paul Nash is a good example whose landscape painting was infused with a heightened sensibility and symbolic content through his experiments in surrealism. Other artists channelled their surrealism and found a way through to utilising it in a wider language, once again rooted in the familiar world - Bunuel would be a good example, using it to create an unsettling edge to his intense explorations of the modern world and its complacencies. Other went through their personal unconscious and discovered 'another world' that enfolds this one, what Jung would call, 'the collective unconscious'. Their artistic language became genuinely symbolic and often, even when highly personal, disciplined and opening out towards revelations bordering or within the sacred - Remedios Varo would be a good example here - she passed through surrealism to the language of the sacred imagination.

Dali, however, appears to have got stuck, having no wider vision to genuinely offer, he repeats, in a descending spiral, the cast up images of his own unconscious or its unassimilated borrowings from elsewhere, so that it becomes an artistic ouvre rather akin to a second hand furniture warehouse rather than anything organic, original or profound, carried along only by his remarkable technical facility. Dali was not 'wackier' than other surrealists, he was simply less successful in making use of the opportunity of surrealism to go beyond the boundaries of the personal unconscious and fathom new worlds and this one in their light.