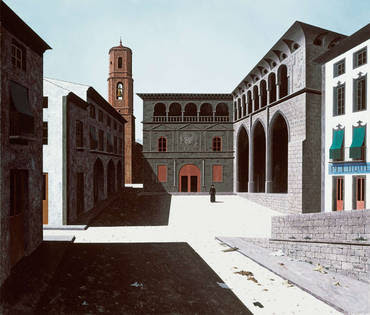 Hillier's world was one virtually empty of people, painted with precision and sur-real. They were both offered with a realistic accounting and yet one shifting towards the mystery of something yet other. Here a Portugese square is both wholly itself and a parable of dark and light, fall and redemption, through which a priest journeys.

After a Bohemian first half of life, he returned to his birthed heritage of Roman Catholicism and became devout - and though he painted explicitly religious paintings, his preferred space was townscape, seascape and landscape seen through their objects rather than their inhabitants.

This absence of people is what, in part, gives his landscapes their surreal impression. He was never a surrealist but like many artists developing in the 20s and 30s, he was influenced by, and knew members of, the 'Movement'. The only group he ever belonged to (and then only for one exhibition) was Unit One, founded by Paul Nash, another artist influenced by the Surrealists who preferred his landscapes un-figured. In Nash's case this was because he was uncertain of his draughtsmanship, in Hillier's it was from positive choice partly for the mystery, partly, I expect, from a trace of misanthropy!

The artist with which he bears obvious comparison is Georgio de Chirico yet whereas de Chirico's worlds are fantastic yet precise, Hillier's worlds are realistic yet fantasy.

I most love his shore-scapes (as below). Who has not seen the assorted boats and fishermen's tackle assembled in apparent disorder on a quiet shore, waiting upon either their collection or their use? The paintings have such a complete aura of stillness as if life has departed (as here footprints in the sand). Who has not fantasised about awaking to discover that they are the only human being alive?

I remember as an adolescent waking early and setting out from home to greet on a summer's morning the dawn. You walked through completely silenced streets and out into the country to sit on a tumbled log and wait upon the sun: the world soundless but for bird song and trembling on revelation. The curtain lying very thin between oneself and another world; the tension between this and another world. It is that remembered sense of mystery that I find so welcome in Hillier's work. 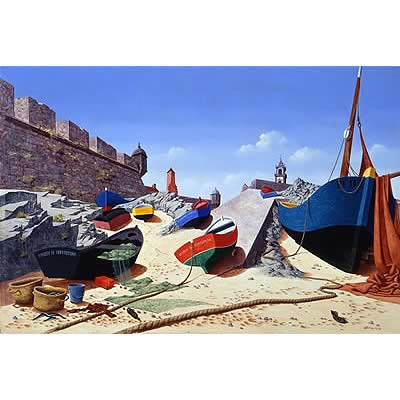