In Search of the Miraculous 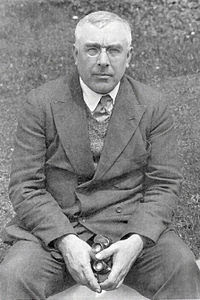 The sub-title of this new edition of Ouspensky's classic account of his work with and understanding of Gurdjieff and his system is misleading: 'The Classic Exploration of Eastern Religious Thinking and Philosophy' because apart from Ouspensky's own linkages between what he was hearing and studying with elements of Sufism, what we do not 'know' is where Gurdjieff got his ideas and practices from (excepting his own geographically challenged descriptions in his own autobiographical 'Meetings with Remarkable Men').

This, I think, was deliberate: what Gurdjieff and Ouspensky, together and separately, were trying to do was to introduce a 'system' that was free from prior associations either with known religious or esoteric traditions. That the 'system' resonates with such traditions (and borrows from them) is clear but the presentation was deliberately 'shocking'. 'Shock' was part of the system's skilful means - that men are machines, fundamentally asleep, and that an immortal soul is only a possibility to be (potentially) achieved only through hard work on oneself (in a necessary group) is offered as an uncompromising wake up call - one that (as they expected) would only be for the few not the many.

For me, it most closely resembles those 'Gnostic' sects that emerged either side of Jesus' ministry - some borrowing elements from Christianity, others remaining free-standing - with their message of a law like universe that keeps man captive, of the possibility of release for the few if they acquire the right understanding grounded in a knowledge that only comes with being in the right state of consciousness and a system that comes with a complex cosmology that reflects the complexity of man's own soul.

For me, I confess it is both intriguing and repellant in about equal measure.

The intrigue revolves mostly around how it reminds you how rarely you are fully present to yourself and others, and how so much of your life is led automatically, a creature of habits. Gurdjieff's picture of the person as a multitude of 'I's -each temporary self giving way to another self in a loosely held bundle of contradictions is very telling and recognisable and how this 'personality' bounces along in life attached to its elations, its mundanities and its sufferings without any real centre or essence. That is 'me', mostly, I can confess, sadly.

The repulsion is that shared by A. E. Waite who once walked out of a lecture by Ouspensky declaring that there was no room for 'love' in his system nor, I would add, grace. Even when you breakthrough to consciousness of a 'higher level' you find it simply differently law like and strangely binding! Like the Gnostics, there is a tendency towards a stark devaluation of 'this world' and yet Plotinus noted (in criticising them) all our judgement is fact grounded in, emerges from, our place in the created order. If this is of no value then nor our any of our judgements (including that the world is of no value)!

As for the complex cosmologies themselves, Ouspensky's accounting of them is, I fear, too dry and pseudo-mathematical for me to connect with!

However, on balance, there is much here to learn - the importance of work in groups and that 'salvation' is not a task won independently for great is our capacity for self-deception, the importance of 'self-remembering' and the ability to be attentive to the ways we are in the world and the consequent ability to struggle against an habitual, half-tied way of living; and, the importance of the cultivation of being as well as knowledge, of emotion into genuine feeling as well as achieving right thinking. Much of this is beautifully and lucidly expressed by Ouspensky so you not only recognise the picture in thought but are convicted of it in feeling.

What is left open at the end of the book is the mystery of why Ouspensky departed from Gurdjieff and why that departure was so difficult, leaving a lasting mark on Ouspensky's self-confidence? That Ouspensky needed to leave was clear (and he tells us such departures were inherently comprehensible within Gurdjieff's own thinking) but why it was not more liberating is left sadly obscure. Ouspensky was a highly gifted thinker and writer in his own right but that part of him remained 'captured' in Gurdjieff's shadow is, I think, sadly apparent.