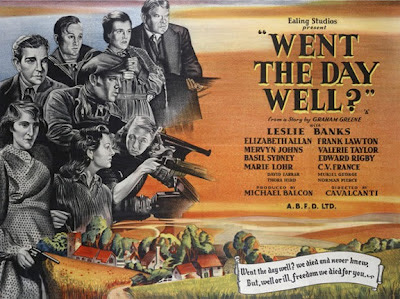 Jack Higgins in writing the novel (and subsequent film): 'The Eagle has Landed' was being, in the words of Monty Python, 'a very naughty boy' as his essential conceit (and many details of plot) had been lifted from Graham Greene's story, made into a film in 1942, 'Went the Day Well'.

German paratroopers occupy an English village disguised as Allied troops on an exercise: in the former case they are there to assassinate Churchill, in the later case to interfere with British radar ahead of a planned German invasion. In both the villagers discover the German plot, which is assisted by a fifth columnist - a respected member of the village, are confined to the church but manage to alert the outside world, and are rescued by outside military intervention.

But watching 'Went the Day Well' yesterday, I was struck by the real differences between the two films. In 1942, the Germans are needless to say bad and we discover nothing about them as individuals. There is no back story. Whereas in 1976, we are treated to an extensive back story that locates this particular group of Germans as 'decent' (They are from an elite parachute group sent to work on dangerous experimental work on Alderney because their commanding officer has tried to save a young Jewish woman).

In the 1942 film the villagers are much more proactive in liberating their village - they take to arms indeed the postmistress hurls pepper into the eye of her guard and then lets him have it with her wood chopper. It is somewhat unrealistic and yet strangely stirring - we will fight them on the beaches and up every lane and into every cranny of the kingdom (This is 1942 after all).  In 1976, the villagers are much more passive victims of the plot - the background against which the conflict unfolds between the German paratroopers and the nearby American forces (I suppose the film had to be sold to the States so they get to rescue Churchill).

Though the actual resistance is melodramatic in 1942, however, it does capture the reality of the Second World War more closely than the 1976 version. The war's casualties were overwhelmingly civilian. This was a war fought against 'civilisation' not within it.

The other striking difference is class. In 1976, all the people we are meant to identify with are 'posh' - German and English (oddly though the Americans are critical to the outcome, they singularly fail to take root as people, except a tragi-comic turn from Larry Hagman as the combat frustrated and incompetent US commanding officer). The only working class character from the village who emerges into any reality is boorish and surly. In 1942, the whole village is in this together and all emerge with equal credit. Class differentiation is inescapably there (and referred to) in 1942 but does not matter when the chips are down. It is unconsciously there in 1976 and does appear to matter to who is heroic and who is not!

This strikes me as an inversion of what we might imagine - though Cavalcanti the 1942 film's Brazilian director was a communist, and Greene was a sympathiser, I do not think it wholly accounts for the very real difference in spirit between the two films. Class is much better addressed when we recognise it exists than when we pretend it does not (a reality that especially applies I think to America where they pretend it does not and end up significantly more hierarchal, not less, than the British).

For all its obvious propaganda elements, Went the Day Well, is a wonderful film - intelligent, literate and beautifully made - and its value as propaganda, I expect was enhanced by the detail of its observation, its strands of humour in diversity, and the glimpsed vision of precisely, in some of its complexity, what was being defended.

It, also, has the final touch of beginning and ending at the memorial to the German fallen, buried in the graveyard. We might be fighting (and when the film was made at our most precarious and desperate) but we would still bury our opponents decently. We are apt to be cynical at such observations but that rebounds to our discredit. Better to have ideals, and fail them, than not to have them at all!