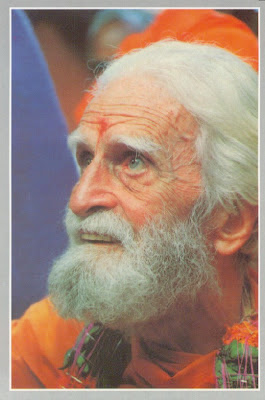 It was on his last visit to England, before his death, that I finally met Dom Bede Griffiths. We had corresponded for years, between Oxford and his home, Shantivanam, a Christian ashram in India. He had become a patron of the Prison Phoenix Trust and though he was, geographically, its most distant patron, he was its most active: writing to prisoners, speaking of the trust's work regularly in the talks he gave both in India and around the world; and, writing words of counsel to me that were always apt, treasured and wise.

I am re-reading his biography by Shirley de Boulay and pondering a remarkable life. An intense, obsessional, emotionally contained individual slowly unwinding and being unwound into holiness. A holiness that was both utterly Christian and completely open to the reality pointed to by other traditions, especially the Hinduism of his beloved India.

He was a 'universalist': each and every authentic tradition bears witness to the ultimate truth but each tradition is a making of human hands through a particular lens, embedded in a particular history. Such making embodies truth, but is not the truth. The truth resides in a mystery that can only be experienced and shown, not told, and whose witness is a complete compassion that embraces all beings. It is a careful balancing act that sees your tradition as a fulfilment of truth and recognising that fulfilment can be found through different routes if trodden with the same openness and vulnerability.

He was an extraordinary man and yet a quiet, unassuming witness to whom we might all become in our own particular way. When we met, I remember carrying a burden of potential questions I might ask. The burden slipped away in his presence: he witnessed to the answer, silently and in the grace of his presence. I cannot recall being so silenced in an individual's presence - not over-awed but simply wanting to sit and be with another, themselves a transmission of the truth. The marvellous conversation which I am sure we had has left primarily the sense of the Presence through him.

Shirley's biography eloquently bears witness to the process of that making. It was hard: holiness is not acquired lightly but it was achieved. I remember having lunch with the Archbishop of Milwaukee who had known both Thomas Merton and Bede Griffiths. Merton, he said, was a remarkable person yet Bede was the 'real thing': a saint.

We are all saints in the making: Bede was a delightful witness to our destination.