A pilgrimage in the National Park 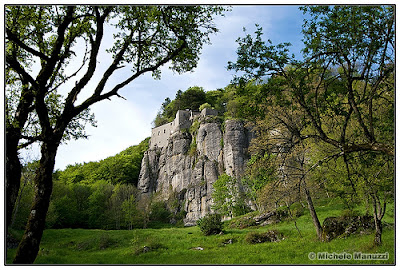 I began the day in La Verna where St Francis received the stigmata. It stands on an outcrop of rock at the southernmost point of a national park. You arrive up a winding road that appears to be empty but when you arrive, as if by magic, the shrine throngs with visitors: Italian families, elderly couples, youth groups in sturdy hiking gear and the odd foreigner! It comes with the requisite restaurant and shop selling religious paraphernalia. Every conceivable version of St Francis (except cuddly toy and inflatable doll) beckons less than enticingly from the shop's walls plus sacred cards, rosaries, candles and incense.

The chapel of the stigmata is away, along the side of the hill, from the main church. In the main church, Mass is starting where a young bearded Franciscan with tapping feet and strumming guitar is trying to tease a response from a small congregation.

The chapel is quiet, small, cool and empty, except for a dominating crucifix and at its feet the spot itself where St Francis knelt, marked by a bareness of rock, enclosed in glass, and an oil lamp burning. I sit awhile pondering one of the things that Father Bede said of Christ's words at the crucifixion: 'My God, my God, why hast thou forsaken me?' Bede asked which God was being forsaken and answered the God of the prevailing tradition. The jealous God who is always stepping in to make things different, that we hope will always be on our side, over and against them, whether as people or our always unjust tribulations. The God into whom Jesus breaks through, in this moment of self-sacrifice, is the loving God who always accompanies us, in whom we dwell, whose hands and feet, to quote St Theresa of Avila, are our own. God of infinite compassion and mercy who is the space where we are, accompanying us throughout.

I sat awhile praying into this mercy and bringing to it people actually loved and known. 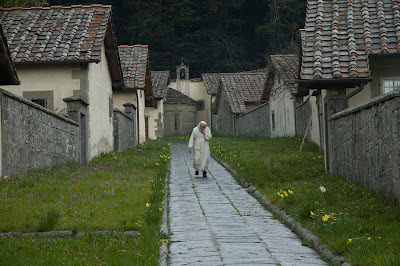 From La Verna, I went to the Camaldoli monastery, located deeper inside the national park. First I visited the monastery and then, after a long walk through the quiet woods, the hermitage further up the mountain (shown above are the small cottages in which the Camaldoli hermits live).

Founded by St Romuald in the early eleventh century, they follow a modification of the Rule of St. Benedict, and it is to this congregation that Fr Bede Griffiths' ashram in India belongs. A photograph of him, with the monastery's then abbot, sits in the Chapel of the Holy Spirit. They are framed by a doorway: the abbot in traditional monastic dress, Bede in the ocher robe of a sanyasi: both smiling radiantly. (http://ncolloff.blogspot.it/2012/06/completing-father-bedes-life.html)

I was struck by the difference in the monastic shop here and at La Verna. Here the emphasis was on products of both mind and hand (rather than mass produced religious artifact). The bookshop was substantial and very catholic (with a small 'c'). The works of Fr Bede were there, and of his great friend, the theologian, Raimundo Pannikar but also works of Buddhist and Hindu spirituality (inter-religious dialogue is one of the themes of the Camaldoli monks' charism). But also there were the traditional goods of the monastery - soap, honey and wine - all three of which I purchased.

I visited the original cell of St Romuald - small, austere but comfortable in its simplicity. On my own here again, I simply stood absorbing the silence and stillness that in such places feels cumulative, acquired. Out again into the courtyard, I looked wistfully up at the eremetic enclosure where nothing stirred: monks probably at siesta I thought. Sleeping can be prayer too.