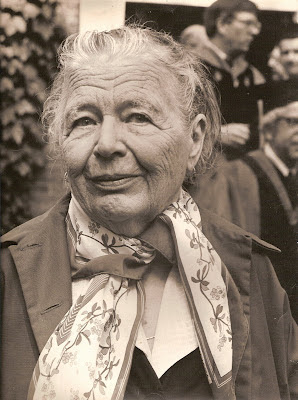 I first read 'Coup de Grace' which described a three-cornered relationship on the fluid front as the Baltic states fought for their independence as part of Russia's post revolutionary civil war. It beautifully captured the tension of waiting that any conflict inspires: short bursts of intense activity are preceded and followed by long periods of waiting.

Years later I read Yourcenar's masterpiece, 'The Memoirs of Hadrian' - one of the great novels of the last century: the only historical novel that I know that allows no contemporary thought or feeling to obtrude. There is no hindsight in the writing - the Christian sect persecuted and briefly alluded to is just that, a minor tremor in the consciousness of the Emperor. His perception and values are allowed to speak as if the conceit were true: these are his memoirs. It is a remarkable achievement.

I read yesterday her novella, 'An Obscure Man' set in seventeenth century Holland (and England, the West Indies and an island off the north east coast of Canada). It traces the life of Nathaniel, son of a Dutch ship builder, and traces a life of obscurity until its early death (of tuberculosis). What makes it stand out is how Yourcenar shows how the world is seen by Nathaniel, how his biases, prejudices, capacities shapes a particular world that is both plain and yet stranded with glimpses of something yet other. She describes beautifully Nathaniel 'at sea' lying on deck, encompassed by a dual darkness of sky and sea, and how it makes him feel at one, in place, able to surrender to a greater whole, but with no necessary assumptions about 'immortal survival'.

Nathaniel dies, alone, as caretaker of an island off the Dutch coast, and walks off into the wilderness of it, knowing his time is at hand. It is one of the most beautiful accounts of a dying I have read. It is truly 'pagan' in that it assumes nothing but nature gathering itself to itself and yet is truly agnostic: Nathaniel does not know into what, if anything, he steps. He may die 'an obscure man' but everyone is in death and obscurity to others and the world does not mean that one's life is not charged with an individual significance, held to oneself.

She was a very great writer - the first woman to be elected to the Academie Francaise - and too little known in the English speaking world - even though her 'great friend' (read partner) Grace Frick was a distinguished American translator.