- January 24, 2012
I first read of Pavel Florensky in Donald Nicoll's wonderful collection of essays, 'The Triumphs of the Spirit in Russia' in a chapter entitled, 'The scientist martyr: Pavel Florensky'.

Subsequently, I read his 'Iconostasis' - a powerful meditation on the meaning of the icon where his 'transcendent realism' is fully displayed. He says, at one point, that the only real question to ask of an icon is, "Is this the Mother of God?" It is a question of authenticity that can be meaningful asked of any art work: is this a true image?

By way of a very different example, you could ask it of the quiet, beautiful, present still lives of Giorgio Morandi, as here: 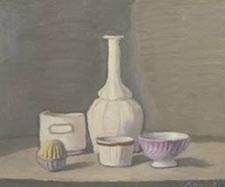 To which the answer is a simply, and wholly affirmative, yes. Florensky would not be surprised (or offended) by this juxtaposition: any authentic encounter with reality that allows nature to speak in its own voice is an encounter that opens this world to an enfolding next.

I, also, read Florensky's unaffected account of his spiritual elder, Fr Isidore, a man of radiant simplicity and spiritual good sense, where his disciple, Florensky, a man of extraordinary culture and complexity, bends his language, restrains it, to allow the spirit of Fr Isidore to breathe through it, without interpretation, to live authentically as himself, Fr Isidore.

Now I have finished Avril Pyman's accomplished biography of Florensky that paints a vivid, rounded and compelling portrait of this extraordinary polymath. He began as a scientist, a mathematician, found his way as a key intellectual in Russia's Silver Age to the Church, was priested, wrote a seminal book addressed to the intelligentsia, "The Pillar and Ground of the Truth" (that one day I will read rather than dip into) and found himself propelled by circumstance into the realm of applied science both to earn a living and contribute to restoring a war torn land following the Revolution.

It was the revolution, deepened in paranoia by Stalin, that finally consumed him. Arrested and imprisoned, he was finally shot in 1937 (and in the Russian Church Abroad, martyred and canonised). His letters to his children from prison. quoted here, are deeply moving - the responsibilities of a father, compassionately shouldered at a distance, tailored to four very different particular needs.

His thought is multi-dimensional and complex but throughout is the persistence of arguing from particulars to the universal. It is the contours of this world, seen in all its dimensions, that leads to another world in which this is enfolded.

The icon is an image of this - it is a particular thing, a showing forth, that exists, here and now, but which opens out (and is given meaning) by the transcendent reality it participates in. How it is shaped, here and now, the fact of its 'reversed perspective' so that the saint leans out to us, interrogating our life, tells us something important of the world view of the person (and the culture) that painted it. By our artefacts are we known and judged.

My favourite Russian painter, Nesterov, was a friend of the family and painted this wonderful picture, entitled 'The Philosophers' of Florensky and his friend, Sergei Bulgakov. 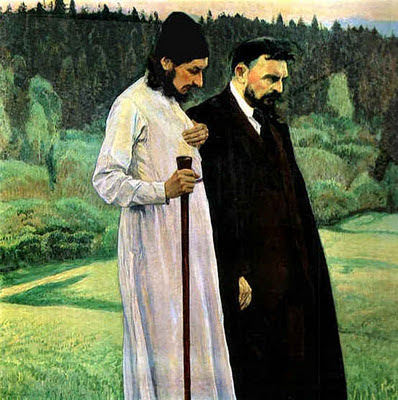 It captures them beautifully - the priestly, stilled, listening Florensky and the brooding passionate Bulgakov (himself soon to be priested and, in his case, exiled).