No end to snowdrops 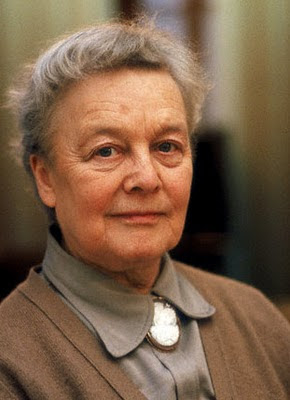 "No end to snowdrops" is Philippa Bernard's authorized biography of Kathleen Raine which, unlike much contemporary literary biography, is mercifully short. Like many first biographies, it aims at a sensible, balanced accounting of the lineaments of a life rather than offer any judgement to posterity on the importance of that life or the subject's work. It is not, in any sense, a 'deep' work.

In this it succeeds admirably - in evoking the life of a poet I remember with guarded affection. Affection because she was nothing other than kind to me, though we had our disagreements primarily over Christianity, but because, as this book makes partially clear, she could cast a sharp edged shadow.

I learnt new things most especially how deep was her involvement with the College of Psychic Studies - both in in the governance of its journal, 'Light' but more interestingly her connection, through two mediums, with whom she believed to be the spirit of Gavin Maxwell. He the abiding love of her life. A love utterly Platonic, and not only in the washed out meaning of that phrase in modern usage. A Platonic love that saw in Gavin a shared soul of imaginative truth. A seeing that Gavin could not accept except, I feel reading this, when he momentarily stepped into his deepest self. It was a subject, that of Gavin Maxwell, having read her three volumes of autobiography, I was careful never to raise with her!

I was happily cast back to the teas at 47 Paulton's Square whose conversation went on so long that tea was often abandoned for whiskey! Reading her visits to India, my eyes reached up from the sofa, to my statue of Ganesha around which is garlanded a rosary from Hardwar that she gave me, remarking that mine was the first truly human face that she had seen since her return from India. A poetic fancy I enjoyed but did not treat seriously. Though interestingly I was yet to visit India and find myself at home.

I loved the descriptions of her relationship with Winifred Nicholson and their common expeditions together: to paint and write. Their work, in different media, have such common tonalities - an exploration of the minute particulars of the world, of colour, of the world's translucence to a different order, a sacred one. Also of her friendship with the Muirs, Edwin and Willa: I cannot describe the strange joy that always overcomes me when reading of their relationship. I broke off to read his poems, sheltered and made possible in her love.

The book does have some odd infelicities: the Muirs are said to have won a 'small grant' to travel to America. Edwin was, in fact, invited to give the Charles Eliot Norton lectures at Harvard - the most distinguished honour to be afforded a poet. Whilst dear Carmen Blacker is described as a distinguished Japanese scholar who was fluent in Japanese - you would hope so!

All in all a good first accounting but a life and work that deserves in due course a fuller body of regard (and criticism).