- June 05, 2011
One of the distinct advantages of attending a course at Schumacher College is its proximity to Dartington Hall and its gardens (as an initiative of the same trust, it is 'down the way'). 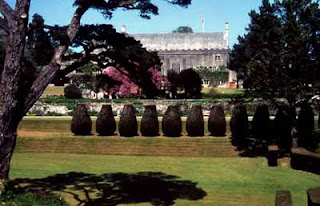 It is a space wedded to my imagination (and unfolding story).

My first visit was to attend the first Temenos conference on art and the renewal of the sacred (though the title should have been reversed: the sacred renewing art).

It was a remarkable gathering - an extraordinary blend of the academic and the practical: the practice of particular arts. Between sessions I could wander the grounds that are a balanced admixture of the highly formal and the wild, breaking out to views over open, rolling Devon hills, with the backdrop of the medieval buildings behind.

The conference forged several lasting friendships and in the on-going reading of Temenos an education in the arts that I continue to return to.

Most notably on that occasion was meeting the artists - Thetis Blacker and Patrick Pye.

Thetis I met at breakfast when I found myself sitting opposite her and she inquired as to whether I was a poet. Something in me prompted in declining this description, the suggestion that I was a dreamer. This was the perfect introduction. Thetis was a formidable dreamer - they unrolled within like short stories (and indeed she published a remarkable book of these) and they were a critical place for the inspiration of her art. We became friends exchanging dreams over the museli: a conversation that continued until her death.

Patrick I met on the evening of the first day when we found ourselves in search of a mutual cup of tea that somehow progressed to whiskey, shared with the English scholar, Peter Malekin. This quickly evolved into ritual. Each evening this particular three would gather to talk, and explore the days proceedings. It was a time of heady talk and simple comforts.

It was a moment when I felt most deeply at home.

But of the garden I remember one very particular incident from the second Temenos conference. We had an exceptional studio performance of Noh drama from the troupe of Hideo Kanze. This highly ritualized drama had made a deep impression on me: concentrated feeling symbolically expressed, charged. Each member had been absorbed in their role both as performance and as spiritual practice.

Later that afternoon, I encountered the troupe in the garden, being shown around, and noticed that all but Hideo Kanze had returned to simply being Japanese tourists in an English country garden. But Kanze was different: he walked his practice, with an extraordinary bearing of attention and engagement. In him there was no performance, it was at one with his practiced reality. It was a beautiful exemplar of presence.