A Passage on Forster 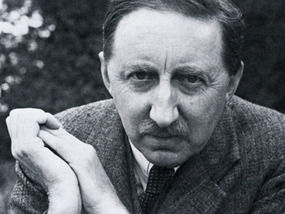 Sitting on the plane to Dubai, I found myself sitting between a man to my left listening to excerpts from the Koran and to the right, across the aisle, a woman reading the Book of Revelation from a well-thumbed Bible.

I felt deeply secular. I was reading Moffat's new biography of E. M. Forster at the point at which he was cruising a beach in Egypt hoping to belatedly lose his virginity. If serendipitous symbolism can be ironic, it was an irony that Forster would have appreciated!

Forster could be seen as a 'secular saint'. Christopher Isherwood described him as the sanest man he had ever met. Like all those marked as saints, he was a flawed human being yet one with qualities that were extraordinarily admirable, and thought provoking.

Critical to this was the importance he placed on friendship, as ideal and practice, and one that radically transgressed social convention, not only, most importantly of sexuality, but also of social class. He was not without the burdening of inherited prejudice, but continually practiced his way through them, often retaining fidelity in the persistent reality of the unreasonable behaviour of others. He believed, I think, that as long as we live our character is not fixed, and we can find its nobility at any time.

One quality that everyone referred to was his ability to listen, a stillness that allowed people to narrate their lives, and fashion and refashion meaning in the light of their being deeply heard. It is a rare quality - one I deeply wished I possessed (I can painfully summon it occasionally out of the sapping miasma of my impatience)!

He championed an aristocracy (that anyone could join) of the 'sensitive, the considerate and the plucky'. This belief in tolerance and courtesy can appear ineffectual mounted against the deadly ideologies of his time but feels now, as always, a light, a candle always threatened by tempests, and yet strangely persistent and resilient.

Though in the public realm, he always remained closeted (and kept his novel of gay love, Maurice, unpublished until his death), he lived a life of private conviction and love that gave strength and hope to many of those he met; and, within the public sphere campaigned for widening the circle of liberty. In this he helped found the National Council for Civil Liberties (now Liberty) and took up individual cases, utilizing his public persona in their support.

He abandoned the novel as a form for as Moffat convincingly argues he could not write of the realities he wanted to, but the novels and stories he left (published and posthumously published) is a canon of high achievement from social comedy dissecting the complex texture of our conflicting moralities to the perceptive examination of a conflict of cultures in his masterpiece, 'A Passage to India'.

Like Austen, he took the apparent simplicities of domestic engagements to explore a wider canvas.  Like George Eliot, he was a secular moralist but unlike Eliot he had no residual sympathy for Christianity (though did recognize the flexible, embracing tolerance of Hinduism, even though its complexities baffled him). Christianity had no humour, and was the source of the moralistic burden by which his life was shadowed.  On him it had no purchase.

The biography is beautifully written - capturing a life in clear, engaging, often humourous prose. The literary and psychological judgements are deeply sound and there is sufficient but not overwhelming detail! It is, finally, very moving - a long life lived with integrity, conviction and generosity.