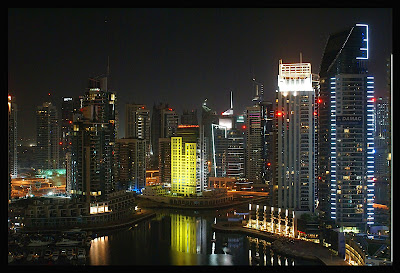 OZYMANDIAS of EGYPT
I met a traveller from an antique land
Who said:—Two vast and trunkless legs of stone
Stand in the desert. Near them on the sand,
Half sunk, a shatter'd visage lies, whose frown
And wrinkled lip and sneer of cold command
Tell that its sculptor well those passions read
Which yet survive, stamp'd on these lifeless things,
The hand that mock'd them and the heart that fed.
And on the pedestal these words appear:
"My name is Ozymandias, king of kings:
Look on my works, ye mighty, and despair!"
Nothing beside remains: round the decay
Of that colossal wreck, boundless and bare,
The lone and level sands stretch far away.

This famous poem of Shelley's tends to leap unbidden to my mind whenever I visit either Doha or Dubai. They do strike you as exercises in environmental hubris (and a complex set of vanity competitions between disparate developers without any sense of place - either possibilities or limits)!

J. R. McNeill in his environmental history of the twentieth century (Something New Under the Sun) describes two mutually exclusive life strategies that animals (including humans) may follow. The first, called the rat strategy, remains flexible, changing behaviour and outlook to marry with a changing environment and until recently people have accomplished rat-like strategies more or less competently living within limits and adapting accordingly within a wider nature. The second - of inflexible specialization - makes a supreme adjustment to one particular favourable and (presumed) constant environment and pursue complete exploitation. Pandas do this, having decided to live only on (apparently) abundant new bamboo shoots (until that is bamboo growth periodically fails, and panda numbers crash). In our case, we have decided on an environment of abundant fossil fuels (which is understandable if you live in the Gulf) and will exploit that environment until it crashes, leaving the towers of Dubai adrift in the sands, akin to Ozymandias forlorn trunks of once mighty legs.

Shelley may have been suggesting that all is transient especially, as a proto-anarchist, of tyrannical leaders, another theme much on people's minds in Dubai, but I tend to think of ecological transiency: here we literally are building our houses upon the sand!

Yet even as I know this, it can be deeply alluring - there is something superficially fascinating about the sheer achievement (even if the whole does not add up, either as city design or sustainable reality). Sitting in the Jetty bar of the Royal Mirage Hotel (rather an apt symbolic name) in your illuminated (and comfortable) white plastic armchairs, transfigured from within, looking across the bay at the night lit city scape, you cannot help being dazzled at the sight; but, I expect Ozymandias was quite a sight in his prime too!