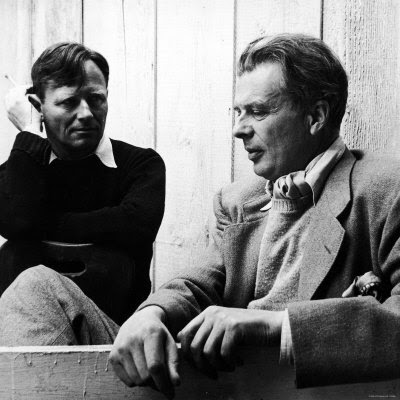 I found myself thinking today of Huxley's utopia, 'Island' his last novel, his last book. It was consciously written as a counterpoint to his dystopia, 'Brave New World'.

It is the account a cynical English journalist's re-education on the island of Pala where a civilization has grown up out of the joint strands of a sceptical nineteenth century Scottish doctor and the indigenous Mahayana Buddhist culture.

This blending has given rise to the discerning use of science and technology - especially to promote and secure health - and a religious tradition grounded in pursuit of the 'Final End': a unity of consciousness and being with the immanent logos and the transcendent Godhead that is essentially practiced rather than believed.

It is a vision of the world that is highly prescient - both in recognizing the likely contemporary challenges of ecology and pressing population and the opportunities of applying our 'scientific understanding' to a new humanism.

This latter is powerfully expressed in recognizing the critical importance of early childhood to the development of secure attachment and the development of healthy empathy. This anticipates our demonstrable knowledge by three decades (and continues to anticipate our common practice).

But it is his treatment of faith and belief that most attracts me.

"What happens is the senseless ambivalence of history - sadism versus duty, or (incomparably worse) sadism as duty; devotion counterbalanced by organized paranoia; sisters of charity selflessly tending to the victims of their own church's inquisitors and crusaders. Faith, on the contrary, can never be taken too seriously. For faith is the empirically justified confidence in our capacity to know who in fact we are, to forget the belief-intoxicated Manichee in Good Being. Give us this day our daily Faith, but deliver us, dear God, from Belief."

This is a quotation from 'Notes on What's What' a text incorporated within the text. It captures that important distinction between a sacred pragmatism that seeks within the practice of transforming consciousness knowledge of who we are and in what our capacities lie and belief that demands adherence beyond (or without) careful testing and exploration. As the Buddha said, we should take nothing he says as anything other than a pointer to what should be experienced within our own following of the path.

Essentially, "Island' is a laboratory for a range of ideas that hope for a new synthesis of a contemplative science and a science deployed contemplatively. It is in Huxley's account both a possibility and a fragile world. It is a possibility deeply worth pursuing.