The burden of vision 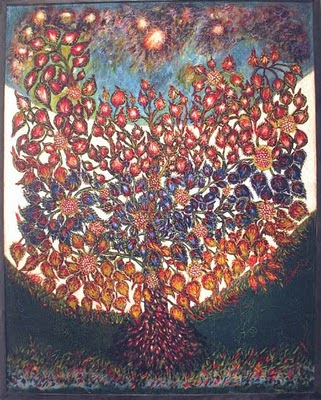 Films on the lives of artists are, I think, exceptionally difficult to realize.  The actual work of painting is crafty, particular, and slow: and, thus, wholly lacking in cinematographic energy (or guise). You may have to be content with the artist's life (that may or may not 'illustrate' the sources and performance of his or her art) and this inclines you to artist's whose lives are known, colourful and dramatic! A touch of, or even more so a disintegration into, insanity helps, as with Van Gogh, as here.

Seraphine De Senlis, as she is now known, was a maid, scratching a living around town in a variety of menial jobs from which she derived no recognition, but she had a gift: she was an artist. Whilst working at a local convent, her guardian angel had commanded her to paint, and paint she did, under the watchful eye of the Virgin Mary, paintings of gathering beauty came from her,  virtually unknown to all and recognized by none, until, whilst attending to one of her houses, she is discovered by a German art dealer, living and working in France.

Slowly he persuades, and supports her, to work wholly on her art, and the work deepens and develops. But this concentration has tragic consequences, her 'detachment' from everyday reality gathers pace, her sense of being chosen deepens, until a final crisis (partly tripped by the economic crisis of the 1930s postponing her Paris exhibition, her full recognition) brings her to an asylum. It was only after her death that the critic, Wilhelm Udhe, could finally give her a solo exhibition, in Paris in 1945.

Their relationship was highly complicated - his support was critical both to its flourishing and to its crisis. He supported her both before and after the asylum but the film beautiful exhibits the difficulty he faced - just how responsible was he, and how did she stand in relationship to him, when so much else in his life was complicated. A German pacifist in France in the First World War who had to flee. A Jew in the Second who had to go into hiding. A homosexual with a convenience marriage etc.

The film, also, beautifully succeeds by showing, but never seeking to explain, the sources of her inspiration - in God, in her angel companions, in nature.

There is a wonderful moment when she asks Udhe whether he believes - at least in the Virgin Mary, surely in the Virgin Mary? He replies that it depends on his mood, an honest answer, but that he does believe in the soul for it explains our capacity for despair, unlike the animals who are always happy (because soulless). Not so Seraphine replies for a cow separated from her calf cries, she has felt it. A feeling that happily refutes St Thomas Aquinas!

She had an extraordinary sensitivity to the live of things, too sensitive perhaps for this world.

The film is beautifully produced and the performances, most especially of Yolande Moreau, are fabulous. She captures her naivete, her complex responses to her art rooted in an acceptance of craft, and her descent from eccentric visionary to disappointed madness. You feel the world could not see her vision and in failing to see, broke her.