A walk in a divided city 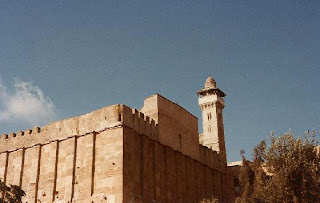 There is a both a synagogue and a mosque on the same site, honouring the Patriarchs: Abraham, Issac and Jacob. It is the place traditionally held to be their tombs. The roots of Judaism are here. The foundations of Islam are here. They are in the centre of the city of Hebron, where David founded his renewed kingdom of Judea. It is a place charged with conflicting religious meanings and competing historical narratives. It is, thus, a place of violence.

In the modern era, two moments stand stark to opposing memories - the massacre of 1929 when 67 Jews were killed by Arabs (though more than 400 were saved by being sheltered by their Arab neighbours) and in 1994 when a Jewish doctor entered the Ibrahim mosque and killed 29 Muslims at prayer. Since when the site has been closely supervised with two different entrances - one for Jews (and as I found 'the rest') and one for Muslims. You quickly notice that the indignities of 'security' are preserved for the Muslims - the back, gated entrance, the intensified prospect of search.

It is the second largest Palestinian city on the West Bank (in the occupied territories). It is home to a cluster of Jewish settlements, occupied by those who settle from the most earnest of religious motivations: that to do so is to hasten the coming of the Messiah by ensuring 'the Land', the whole of it, is filled with the presence of the race.

I was given a tour by two former Israeli (and Jewish) soldiers from 'Breaking the Silence' (http://www.shovrimshtika.org/index_e.asp). This is an Israeli NGO formed by ex-soldiers, who have served in the occupied territories, and who oppose the occupation: both for moral reasons (that the control of the Palestinian community it represents is 'state violence') and for the harm it does Israel
itself - militarizing the country and eroding its own civil rights (and its long term security). To say this is a controversial (and minority) position to hold is an understatement.

That the tour was, in fact, remarkably balanced, even dispassionate, made it all the more effective, and affecting. You were confronted with the facts on the ground in a way that will continue to haunt.

I saw streets, so called 'sterile streets', where Palestinians could not drive, some where they could not walk, some where the front door of their houses as a result were barred and useless. A once thriving centre was reduced to an eerie quiet.

I saw where during the second intafada Palestinian gunman had, each night, fired down into the nearest Jewish settlement; and, from where the Israeli army fired into the Palestinian settlement, a fire designed to silence the gunman by overwhelming the whole community. A fire once directed by one of our guides. You heard of the intended randomness of house searches that unfold on a daily basis to keep the level of anxiety and fear at the appropriate levels synonymous with control. You heard of the success of this strategy and its accompanying tactics - Hebron is controlled. No one dies, mostly, days pass in an imposed calm - except for periodic bouts of settler violence, rarely if ever lethal, directed either at Palestinians or the Israeli police (but never the army).  As a counter-balance, you stood in the market place, at the memorial to people blown up by a Palestinian suicide bomber. A market now closed.

Most moving and saddening was the direct testimony of the soldiers themselves of the erosion of their own morality, their own behaviours in fulfilling the obligations of occupation and the perceived defence of Israel.

All the way we were accompanied discretely by the police to protect us from the settlers. Our guides are 'infamous' in the area and seen as 'traitors' by the settlers. As it happens all we got was casual abuse from passers by who stayed safely in their cars. One woman calling out, "Hear the other side of the story. There were Jews here long before the Arabs came." This, as my guide acknowledged, is perfectly true. As a statement of history, it is indisputable but what does it add up to. If the descendants of the Canaanites were to materialize, pitch home in the midst of Hebron, and make a similar claim, would the settler depart? No, because then, of course, she could fall back on theology, after all 'God' gave the land of the Canaanites to the Jews!

It reminded me of a similar tour of Belfast that I had undertaken with a friend who was, at the time, working to bridge the barriers (and silences) erected by sectarianism.  Here were the same minute demarcations of territory, the same colourful grafitti of insult and threat, similar behaviours of intimidation by the army and the same competing appeals to history and to God!

It would be easy to despair after such a tour (as it was in Ireland) and though the Irish comparison is tempting, look you could say there was a perceived intractable situation that did move, here it did feel, viscerally feel, more engrained, more resolutely 'stuck' in deep rooted fears and anxieties, competing narratives and hostile claims.

I did notice how tempting it was to think of the settlers as 'crazies' or 'fanatics' (in my own mind, never in that of my guides, who though 'opposed' to the 'settlers' were never anything more than courteous in their descriptions of their positions, if critical of some of their behaviours). But this leads you into a cul de sac: it is a comforting effort at dismissal, a failure to understand.

I was equally tempted to wonder that you should be careful what you pray for - the settlers might not receive the Messiah they were expecting. It was Martin Buber who translated YHWH as 'I am there as whoever I am there' or in other words God appears in precisely the way in which God chooses to appear and that manifold of appearances are always subversive of our narrowing fantasies. If at the heart of YHWH is justice, it is a heart that weeps over Hebron.