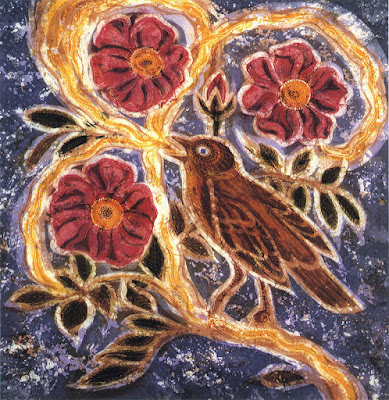 Her dreams were 'big', complex, of the nature of stories and indeed she published a volume of these: A Pilgramage of Dreams. Mine, by contrast, were brief, jewel like (and, so she claimed, purer than her's, a somewhat embarrassing claim when she introduced me to others, indeed once a whole lecture theatre of others, under this charge. On that occasion, I spent the rest of the conference sheltering from people siddling up to me wanting to tell me their dreams)!

She was larger than life. I went to see an exhibition of her's at Bleddfa in Wales, where in fact I bought my first painting - one of her's - a seed from the Tree of Life. Arriving early and puzzling where to go, I heard her voice lifted above an intervening, high hedge. I found a gate and walked through to, embarassingly, find myself amongst a private luncheon party! Retreat or forge on? Noticing the poet, Kathleen Raine, who was to introduce Thetis and open the exhibition, I forged on, planted myself down unexpectedly by the poet's side and took refuge in her welcome, shielded from the puzzled host, now forced to offer me food!

Once I went with Thetis to the Marlborough Gallery in London to a show of Francis Bacon. The Marlborough has a subterranean gallery and as we descended the stairs and seeing Bacon's paintings, Thetis' voice boomed, "Behold Nicholas, the Hell in which we pretend no longer to believe", much startling the assembled visitors, clinging to their wine glasses, but as apt a piece of art commentary as one is likely to encounter. Bacon was Thetis antithesis - a painter of unremitting pain, stripped of meaning (and whose reputation is as overvalued as Thetis' was undervalued).

Interestingly, however, such life (and colour) was haunted by the shadow of depression and she would disappear periodically when the 'black dog' struck with its seeping debilitation.

I remember vividly the last time I saw her, before I left to live and work in Russia. I had gone to lunch at her cottage in Shamley Green, as always, an excellent lunch for she was a brilliant cook. We were sitting, having tea outside, looking out across the Downs and she was describing the effects of the sun's light with a precise and artist's eye; and, very gently you were being given a lesson in seeing. You were, also, being invited to note that inner and outer worlds enfold each other. She was a painter of the inner but the triggering recognition, the invitation to go inwards, was often offered by the outer - a detail of the light, a pattern in a curtain - 'all' that was necessary, needed, was a dedication to seeing through, as well as with, the eye (to quote Blake) and to recognise that inner vision (to quote Blake again) is more, not less, precise. Imagination, when learned aright, is never akin to 'dreamy' (in the populatr sense of the word) and its depends on the quality and detail of your attention.

Publicly Thetis' work can be most readily seen in the cathedrals and churches that commissioned her work, fulfilling an ancient tradition of patronage: Durham Cathedral, St Albans, Winchester and St Boltolph's in London to name the most prominent.
imagination Thetis Blacker 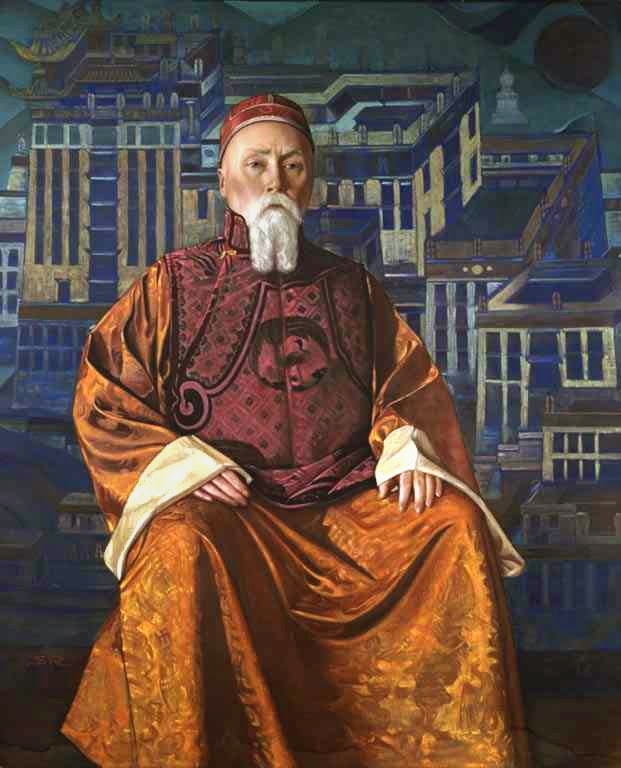 Nicholas Roerich is oft depicted as a spiritual seeker, peace visionary, author of numberless paintings, and a brave explorer of Central Asia. However, Andrei Znamenski in his 'Red Shambala: Magic, Prophecy, and Geopolitics in the Heart of Asia' has him perform another role - that of geopolitical schemer. The scheming did have at its heart a religious vision - of a coalition of Buddhist races in Central Asia that would establish a budding utopia - the Shambala of the title - from which the truths of Buddhism (and co-operative labour) would flow around the globe. This would require the usurpation of the 13th Dalai Lama to be replaced by the Panchen Lama guided by the heroic saviour (Roerich) who appears above dressed for the part. In the achievement of these aims, the Roerichs (including his wife, Helena, who had a visionary connection with 'Mahatmas' whose cryptic messaging guided their steps) were willing to entertain strange bedfellows that at one time include
Read more